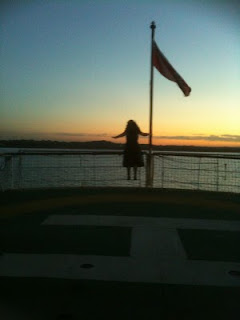 Good evening, and greetings from home where I have landed from my cruise, which was wonderful. Before I tell you all about that, allow me a moment of self-wotsit. I won an award. Moi. I thought it was a wind up at first but it's quite genuine, hence the rather pretentious badge immediately to the right of my blog. I had an email which read -

I have some good news for you: your site Laura's Life and Thoughts has been chosen by SexForums.com Editors as a 2010 Best Pick! I'm the Editor-in-Chief of SexForums, which since 1998 has been one of the world's largest online adult communities.

Last fall our editors started putting together a program that would spotlight the best adult-themed web publishers for our members. We began scouring the web for the best, finest, funniest, and most informative adult sites and blogs. I'm happy to inform you that your site Laura's Life and Thoughts was chosen by our Editors to represent the very Best the Web has to offer."

I'd like to thank my cats, clients and chardonnay, who made it all possible. :D
Isn't it mad, you type some random guff onto the internet and not only do people read it but they give you an award. I mean, WHAT ??

Right, to the cruise. See, it wasn't really a cruise. It was a trip aboard a working ship. She is a member of the Trinity House group, so her main purpose is to service buoys and light houses in the immediate area. That might sound very boring to some of you but trust me, it was absolute bliss. There are only 6 bedrooms on board and we were in the Duke of Edinburgh suite, which was beautiful. To make the guests more comfortable we had two stewards on hand to serve us delicious meals and attend to our every need,so it was true luxury. ( When I say "every" need, one of them was blatantly geigh, the other questionable. )

During the day we lazed around on deck in the glorious sunshine and we had the choice of watching the ship at work or simply doing nothing. Because there were so few passengers on board, there was no "Shuffleboard starting now on Deck B" and for us that was perfect, just total relaxation. ( Incidentally, total relaxation also includes moi, doing my Kate Winslet impression on deck as shown in the photo taken by Mr F above. Oh, the shame. )

To be honest, our fellow passengers were entertainment enough. We had Wing Commander Tristan Smedley Smythe and his lovely wife, ( who really wore the trousers ). He indulged my private desire quite unbeknown to himself by marching through the guest's lounge in the direction of the bar before loudly declaring "BAM" and sharp turning towards his cabin, marching with his arms swinging wildly. I sat agog.

Overall there were five couples ( including myself and Mr. F ) and one single, P. By God was he determined to make his presence felt. He was the most rude, obnoxious, belligerent, pig-headed ignoramus I have ever met. I thought he was wonderful.

He was the type of person I guess would be called a "troll" on the internet, except his chosen weapon was his mouth. I liked him, everything he said came with two kilos of salt and a glint in his eye. He went out of his way to wind everyone up and in the main, the bait was taken, chewed and swallowed. Towards the end of the week his efforts were having minimal effect because he had run out of steam, or offensive material, or both. So he had to up his game.

"I say, I suppose you're all wondering why I'm the only singleton on this Godforsaken rubber dingy. I have been divorced for quite some time and these days I prefer the company of an expensive escort."

There was a protracted silence and to save the day, Mrs. Wing Commander started a loud and animated conversation about her favourite suet pudding. I just smiled.

Come the last day of our trip and I sidled up to P on the lounge deck.

"So this lady friend of yours, does she allow COB ? CIM and OWO ?"

"Gargling is just showing off, don't you think ?"

I flashed him a demure smile and sashayed off.