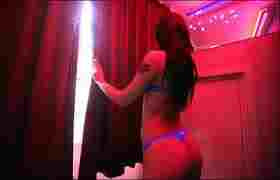 Greetings from Inverness where I have landed having deftly avoided the Pope and his entourage, I hope he'll find it in his heart to forgive me when I throttle the drunk piper directly under my window.

I'm trying to catch up on - well everything really, because I have been very busy, the scaletrix of escorts this past while. I've been up and down the M8 "like a bride's nightie",( one of my Nan's fave expressions ). I'm not complaining mind, especially on foot of my outcall the other night to a tall handsome doctor, oh yes. True job satisfaction, the beauty of doctors is they know what a clitoris is and further, they're aware that sinking their teeth is not going to induce a state of arousal, more aggression than anything else.

Speaking of aggression, what is WRONG with some people ? I'm aware that when I'm working hard and am tired I can get narky, who doesn't ? I've never seen the need for outright rudeness, however.

"Well fuck you then."

Je-sus. How to make friends and influence people, NOT. In stark contrast to that pillar of society outside my local supermarket, this week I began doing an interview with an Edinburgh based newspaper, which is a work in progress and will probably be out in a couple of weeks. That's all I'm allowed say for now because believe it or not, apparently journalists steal ideas and stories from one and other. Gawd, you live and learn.

Speaking of journalists, I watched "Gail Porter investigates prostitution" with huge interest. All credit to the presenter, she went into the project with a very open mind and was prepared to consider any and all angles, at least that's the way it came across. Once again the focus moved to trafficking, where the police raided a flat to find one lady of 51 who was working quite legally. What interested me more was the attitude of the police after the lady had been removed from the property.

The officer concerned was very quick to point out that in his opinion, no woman would ever choose to be a prostitute. Au contraire, I can assure you I made an informed decision to become a prostitute and have never regretted it.

I was interested in what Ms. Porter went on to say too -

"Most of the women seemed very strong, or at least they tried to be strong."

I think for the most part you do need to be a strong woman, unfortunately in the not too distant past I have witnessed a couple of ladies go into mental breakdown / burnout and it's frightening to watch the speed of their demise. It's precisely for this reason that I feel decriminalisation would be beneficial. Sex workers should feel able to come forward and ask for support services in the same manner as any job which is personally demanding. Unfortunately, I think stigma and fear of publicity holds some back, which is very wrong.

"I'm no expert, but I do believe we should be making changes to the law to make it safer for women.

In the UK, it is illegal for two women to work together in a brothel*. To me, this is completely ridiculous, as it forces women to go out on their own, which is more dangerous. As if the job isn't perilous enough.

They should be able to work together and have the same working rights as everyone else. I also believe criminalising women is wrong - it doesn't help anyone.

In New Zealand, the whole system is decriminalised. There, women can work together in brothels and they are protected.

Prostitution has been around for a long time, and no doubt it will continue, so we need to protect these women and do everything we can to make a terrible situation a bit more safe."

I'm off to Carlisle next week and will catch up with you there.

* Not strictly speaking true, it is not illegal for two women to work together in a brothel, a prostitute cannot be charged with any offence related to prostitution just because she is working in a brothel. What is illegal is owning/running/managing etc. the brothel wherein the prostitutes work. ( Thank you to Punternet for that. )
Posted by Unknown at Friday, September 17, 2010