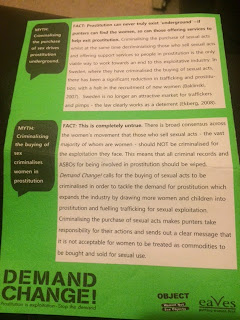 If you follow me on Twitter or read this here blog from time to time, you'll know, the one thing I cannot abide is bad data. Sometimes it's down to sheer laziness, but in the majority of cases, it's a very deliberate misrepresentation by those who would further demonise the industry I know so well, usually for profit/funding. From the sublime to the ridiculous, one of my recent favourites was that there are at any given time, over 80 victims of trafficking in Galway. Not only that, but there are 20 men per day queuing up to have sex with women who are of course, chained to radiators. I can find many reasons to hold the Irish Alpha male in utter contempt, but actively pursuing victims of trafficking and in those numbers ? Not buying it. Antis can demonise the average client all they wish, but I'm certain that out of 20, several would have blown the whistle.

For a shining example of dodgy statistics, allow me to introduce Object. On their website they cite the The End Violence Against Women Coalition (EVAW), as saying "the sexualisation of women in the media ... is a 'conducive context' for violence against women" which they want to see an end to. I can't quite marry that statement with the recent demonstrations Object have had outside strip clubs, during which they are alleged to have spat on the strippers entering the premises. Yes, I said they were spitting on them, apparently this is how we end violence against women. Further, here is a video taken at such a recent demonstration, in which Object and their supporters call the men entering strip clubs scum, losers, wankers and rapists. At the end of the video is Roz Hardie, CEO of Object.

I had the good fortune to meet Roz at a recent speaking event in Carlisle and she sat and watched me take Object's statistics apart. I have one of their "fact" sheets from that event (pictured) which contains some statistical beauties -

- "75% of women became involved when they were children." That has been debunked so many times it's laughable. It is a statistic based on a study of street based sex workers, ALL of whom were underage on entering. Aside from that, street sex work represents about 12% of the overall industry so that statistic is, I'm afraid, hogwash. See also, this resource.

- "9 out of 10 women would exit if they could." Funnily enough, if you interview women for your "study" ALL of whom are already part of an exit program, that's not quite so compelling.

- "In Sweden there has been a significant reduction in prostitution." Huh ? There was an initial fall in on street prostitution but the number of massage parlours in Stockholm doubled.

- "The law in Sweden is working." Now you're just being silly. Have a read of this account straight from a Swedish sex worker.

I could go on and on but I think you get the picture. No-one denies that abuses happen in the industry, as they do in every industry, but it's really not helpful to finding a real solution (psssst....decriminalisation) to grossly misrepresent such important data for your own agenda. As sex workers and also as campaigners, we get very frustrated, and understandably so. I get emails all the time from sex workers saying - "What they're saying is rubbish ! I've been doing this for years, I wish I could come out and speak with you." I wish you could too, but wouldn't ask that of anyone, there is a very high price to be paid when you tackle NGO's where it hurts, their pockets.

As a big fan of Twitter, and on a day when I really needed a good laugh, (I had just finished reading a press release from Doras Luimní) a hashtag #sexworkstats started. Sex workers around the world used the opportunity to poke fun at the abolitionist method of scare mongering with stats. Below I have listed some of my favourites, the sense of solidarity was badly needed and the sense of humour in our community was never more apparent. Enjoy.

97% of statistics used against sex work are ficticious. The other 3% are privileged and unrepresentative. #sexworkstats

100% of pro-dommes report that "I want to do whatever you want to do, mistress" doesn't mean what you think it means.

100% of sex workers failed to realise they'd sold their bodies & continued to use them afterwards. #sexworkstats

76% of escorts state their favoured position as doggy style, so they can pretend it's George Clooney. #sexworkstats

97% of escorts try to make the other escort laugh during threesomes. #sexworkstats

84% of sex workers have at least one cat. 5% of the cats reported being awake when a client was present. #sexworkstats

5% of sex workers do not own a cat, we dont talk about them #sexworkstats

Study proves that a history of engaging in prostitution leads most women to later having a sandwich for lunch. #sexworkstats

99% of men think they'd be great at sex work. They'd be wrong. #sexworkstats

87% of 2028's sex workers will enter sex work because their parents let them stay up and watch Game of Thrones. #sexworkstats