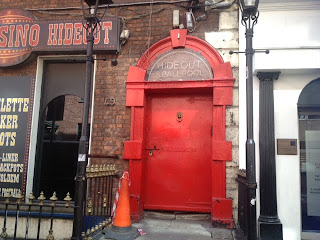 As hard as the recent battle in Scotland was against the anti's, it was manageable. Oh sure, we had the misrepresentation of statistics, the 'Nefarious' roadshow, the dogged determination of Abolition Scotland to convince us all of the existence of thousands of sex slaves in Scotland to name but a few, but we got there. Ireland on the other hand is a work of art when it comes to anti's antics, they are literally running amok.

At roughly the same time as the consultation on prostitution began, Ruhama wheeled out a 'survivor' of the 'horrors' of the sex trade, to speak in favour of the introduction of the Swedish model. Enter stage left - Rachel Moran. To my regular readers, Ruhama need no introduction, I've written about their background as the same nuns behind the Magdalene scandal, not to mention their extensive government funding here.

From the very beginning, I sat up when they introduced Moran. In many respects she's perfect to front their cause. She's young, she's very attractive but not quite well spoken enough as to arouse any disbelief. Her book, which I've read, is the classic tale of rising from the ashes of a car crash existence to putting herself through Uni to where she is today. All very admirable, but something was irking me and I needed to work out what that was.

Moran and I worked in Dublin at the same time, the early nineties. I worked in the same brothels, for the same escort agencies and had regular contact through the drop in clinic on Haddington road with the same women, she says she stood on street corners with. One of those women is now a prominent activist working alongside me and is prepared to swear an affidavit to the effect that she has never set eyes on Moran until her book launch. That's not to say that Moran is falsifying the fact that she worked on the street, but isn't it odd that they never met ?

The picture I've included for you above is of the first brothel I worked in, which sits just behind the main shopping thoroughfare of Grafton Street. It was run by Tom McDonnell, a notorious pimp who went on to serve time in Portlaoise prison and fell foul of the Criminal Assets Bureau. Now, you might think that my description of Tom as a notorious pimp means that I had a terrible time working there, not at all. Actually, Tom and I were rather begrudgingly fond of each other. In fact, when I wrote this piece on Back to brothels and spoke with fondness of the day I got sacked for the third time for laughing about his 'tubular drier', it was Tom I was talking about.

Each Christmas Tom threw a party, and we tried anything and everything to get out of it. It was referred to in our circles (affectionately) as 'The Hoor's Ball', and in spite of loud protestations, we were taken out for a full Christmas dinner with all the trimmings, followed by enough booze to float the Titanic. Writing this, I realise that I still miss the comeraderie of brothels. Yes, we bitched and we fought, but at the base of it there was an unbreakable bond between the women, it was us against the world. It was in Tom's that I learned of the 'tain't' (t'aint one or the other) - aka the perineum, that area of a man which is super sensitive and the best place to head if you want to end an appointment early because the take away has just arrived in the staff room. It was in Tom's where I held my head very low after I learned that a request for 'water sports' didn't in fact mean a day on a yacht and was more to do with a shower cubicle and lots of towels. Yes, the other women laughed, but it was good natured and the protective arm was always there, looking after me as a newbie.

As a sex worker in Ireland in the early nineties, I began to spread my wings, and 'touring' became the norm. I visited Limerick, Cork, Waterford, Kilkenny and Galway. At that time we all worked for the same lady, Marian, and although I can't say that she looked out for us as Tom did, she certainly never did us any wrong.

So I struggle, I really do, to see why Moran hasn't been more forthcoming in her 'memoirs'. I worked for them all. Tom, Marian, Karen, Alan and Raymond (the chuckle brothers), Melanie, Amanda. Those names will mean nothing to you, but to a sex worker who was in Dublin at that time, she should know exactly who I'm talking about. Why the secrecy ? Why the blanket claim that all of her experiences were so horrifying ? It simply doesn't add up. Moran says that in seven years of sex work she never met one client who showed her a shred of empathy or kindness. That's incredible. Because in all of my time there, I met some lovely guys. What, she never met the motorbike Garda we all christened 'Chips' ? He was a dude, and always gave us the heads up if there was going to a crackdown.

Turning to the language employed by Moran, it's here that I find the biggest discrepancies, it is literally like she is reading from a script. In a recent interview at a Waterford 'roadshow', she described some of the terminology used by the sex industry to 'sanitise' the whole transaction. Not a chance in hell are they her words, I'll wager anything on it. Similarly, the devil is in the detail and in her book, she repeatedly refers to 'domination'. The only issue I have with that is that back then, we never used that word, it was always 'discipline'. These might seem like minor discrepancies to you but to me it just added to the overall feeling of unease I had.

I was right. Having sat back and studied Moran for weeks, a very brave co-activist came forward and confirmed that Ruhama had approached her. She alleges (and I absolutely trust her word) that they offered her money to 'turn' and campaign for their side. In fact, they offered her a book deal and a tour too, exactly as Moran has now. She refused, because she has a conscience. So do I, and it is for this reason I can no longer stay quiet about the blatant lying that the anti's are doing. For people who purport to care about 'vulnerable women', it would seem that the truth can step aside to make room for continued funding.

It is an appalling situation and I will be doing everything in my power to access the working group which I understand is to convene following summer break. One final point. As I understand it, the anti's in Ireland have a habit (every pun intended) of collaberating with a Sunday newspaper which routinely outs sex workers and makes their lives unmanageable. I hold a letter from that newspaper, dating back to the early nineties, promising not to publish my details or make mention of my (and I quote) 'vice activities'. Pictorial evidence available. I wouldn't, if I were you.