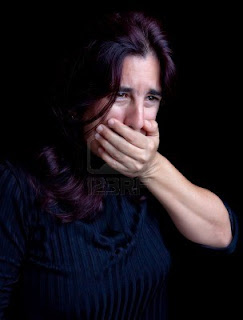 Let me make this clear from the outset - I hate vomiting, it's the most disgusting sight, smell and sensation, EVER.

Sometimes though, I guess it's a necessary evil, the body's way of getting rid of that which doesn't belong or will cause harm, such as the bug which provided me with a very rude awakening at 4am this morning. I looked skywards as I often do and loudly remonstrated with anyone else who happened to be awake - "YOU ARE HAVING A GIRAFFE, RIGHT ?" This was the morning I was to jet off to London for three days to fulfill an exciting schedule and meet up with some old friends too. Alas, it was not to be and I have spent the majority of today in the bathroom, so much so that if I am ever called upon to go on Mastermind, my chosen area of expertise will no longer be the sex industry. No, it will be the ingredients of every shampoo and toilet cleaner ever invented.

Come the afternoon, I had reached the conclusion that there couldn't rationally be ANYTHING else left to come up, so I took several ginger sips of water and headed out to do some messages and praying to God that I wouldn't run into a client looking like something Boy Cat had coughed up. My first port of call was a place which was all too familiar to me, bored looking employees trying to look vaguely interested in a pep talk being given to them by their line manager, who was playing to the crowd more than anything else - David Brent is alive and well and working in financial services in Ayrshire. I thought back to my time on the corporate hamster wheel and gave thanks to the Goddess for Fallen Women that I am now a very happily self employed hooker. No more pep talks for me, no sirree.

I was once sent on a course on the effective management of waste paper, which lasted three days - I kid you not. I amused myself by playing hangman with a lad from Inverness, who insisted 'Dallas' only had one 'l' to the point where the supervisor asked if we had something we would like to share with the rest of the group. Actually, we had - but it was most certainly not up for discussion with the course attendees and that very morning over breakfast we had vowed to never speak of it again. (Well, what do you expect ? Put some young delegates in a Glasgow hotel for three nights and give them twenty pounds dinner allowance, one pound will be spent on a bowl of chips and the rest on alcohol. QED.) Those course 'facilitators' had a knack of making us feel like we had the intellectual abilities of a turnip, I still recall with horror the opening line every morning - "Let's start with a fun game, a wee ice breaker". The only fun to be had with that was going in my mind from ice breaker to ice pick and entertaining a horrific imaginary scene of corporate violence.

Having 'enjoyed' all of those memories whilst standing in the queue, I realized it was almost my turn to reach the counter. I also realized that my stomach was starting to churn. Then came the sweating and the dry throat, that awful sensation when you just know what's coming. As I saw it I had two choices - run out onto the street and try and find a bin or upchuck right there and then. The street was out because it was lunchtime and literally heaving with sandwich laden suits. With seconds to spare I just made it to the waste paper basket beside David Brent before decorating it in style with the accompanying sound effects. There was a sharp intake of horror and a laden silence. This one would have to be brazened out.

"I hope you've all brushed up on your disposal techniques, yes ? Have a lovely afternoon".

With a flick of my hair and a flash of my broadest smile, I strode out the door and into the sunshine. Perhaps vomiting isn't so bad after all. 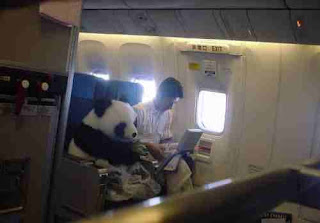 With the final arrival of Spring comes the promise of new life and hope, unless of course, you're an Edinburgh panda.

Many years ago I was dating a lovely chap who was very much of the 'open your mouth and think later' school of thought. We were watching television in my parents' lounge which is what you did when you were romantically linked and aged fourteen. Much to my delight, one of my favourite advertisements of all time came on, that Kit Kat ad with the dancing pandas, tormenting a photographer. The future father to my children watched agog, before asking in amazement - "Jaysus, how did they train the pandas to do that ?"

The Mother sucked air in through her teeth and my dad muttered 'Jesus Christ' under his breath before exiting stage left, to let the dogs out for a toilet break and I imagine, kick various inanimate objects around the back garden. At that moment, the future father to my children became my future nothing at all, but my love of pandas had just begun.

As a sex worker, I know that the male of the species can have severe anxiety around their performance at the best of times. Scores of people filing past the enclosure every day staring at you is bad enough, but when you have people in white coats with clipboards doing all but roar -"GO ON MY SON", then I think we need to take a step back and just let nature do it's thing.

Personally I deem it a great shame that they can't be allowed to just get on with it, although I do love this quote from STV - 'The panda cams have been switched off in preparation for the love tunnel being opened'. Whoever penned that can't have had a straight face.