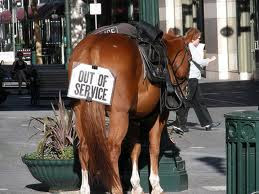 Good evening and greetings from Inverness. I'm not on tour, rather I'm in Amanda's kitchen, recovering from a trip to Jimmy Chung's all you can eat buffet which would put Bessie Bunter to perpetual shame. I decided to take the weekend off and chill out, so today we took our little people horse riding and then sat in Inverness giving each other surreptitious grins and looks every time we clocked a lesser spotted client almost going through a lampost at the apparition of us in jeans, with children and to be honest, smelling like stables. Wonderful stuff.

When I moved to Scotland, I was horrified to discover that Irish people are known as "thick micks" and have a reputation for being incredibly, um .... dense. I have to tell you, the Irish passport office in London don't do us any favours. I sent our passports down to be updated prior to our forthcoming trip to Turkey and I'm surprised they didn't ask for a DNA sample, it was a fecking farce. I had to sign a declaration to say I'm the Mother of my little darling, in spite of the fact I was her Mother when they issued her last passport, and despite the recent influx of Brad Pitt and his extended family, I remain so. I am firmly convinced that one of the requirements for employment at the passport office is to show an IQ akin to that of an aubergine. Ho hum. Speaking of holidays, Susan is winging her way back from The Dominican Republic on Sunday and she has had a wonderful time, the temperatures were in the thirties every day and she swam with dolphins, it must have been awesome. I'm not sure if she'll join me in Inverness on the 3rd but she'll almost certainly be with me in Belfast.

Next week I'm off to Englandshire with one of my guys and I'm not back until Saturday, I'm looking forward to it immensely, we have some real fun planned of the "must not mention in blog" variety, discretion being the better part of valour, innit ? In the meantime I have some very limited availability in sunny Glasgow from Monday to Wednesday, please book in advance or else I cannae see you.

Finally, I happened to be watching This Morning recently and there was an interview with a girl who was coerced into working as a prostitute from the age of 13 in an Edinburgh sauna. Many emotions came up when I was watching that interview, of course I felt pity, empathy, a maternal protective urge, amongst many others. Overall though, the one thing I felt was ANGER.

This girl was seduced by an older man who got her hooked on heroin and told her the only way to pay off her debt was to work it off in the brothel. During the interview she was accompanied by her Mother. Now, I'm not nominating myself for "Milupa Mother Of The Year" or anything, but at the same time, at least I know exactly what is going on in my daughter's life, although I appreciate she is younger. See, I get that the girl worked the backshift in the parlour from 5pm until 10pm and she was told what to say when she went home, I'm ALMOST understanding that. However, hooked on heroin and the Mother didn't notice ? REALLY ?? I'm sorry, but something stinks there. ( I really wish I could provide you with a link but I've searched high and low for a clip and I can't find it. )

What struck me during the interview is that the girl concerned said that she felt the answer was to shut ALL saunas in Edinburgh. She said that the clients were normal respectable men who ran local businesses, and that some of the girls who were working there were doing so of their own volition. Right, call me a thick mick if you will, but what purpose would closing the saunas serve ? The answer here lies firmly with the parlour owner and the parents. If the saunas were closed, all that would happen would be a shift from recognised establishments into underground grotty flats where it would be impossible to reach those who so desperately need help.

If prostitution were to be decriminalised, then regular checks could be conducted by the police and that girl's trauma would never have happened. Parlour owners would be required to check ID and further, to check that the ladies are working of their own volition.

I do apologise, but as a "thick mick", to me that makes perfect sense. 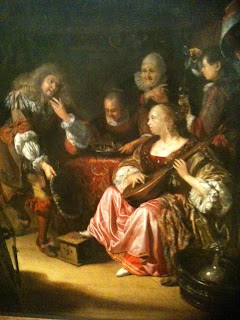 Good evening and greetings from Inverness where I have landed having run the gauntlet with the tail end of Hurricane Irene on the A9. God it's good to be back, gurning at truckers and racing idiots in their Corsas with two exhausts, ( I don't race them by the way, I just put my car into third gear which is usually sufficient ). Anyway, I mentioned I was taking some time off to look after some "real life" issues. That went well, NOT. No sooner had I decided to down tools than I became very ill, very quickly. Perhaps my "corpus" was trying to send me a message. Well, said message was received and understood and following extensive nagging from my nearest and dearest I took the week off and retreated to my boudoir with boy cat where I fell deeply in love with Terry Pratchett. I have started reading "Mort" and have been chortling aloud in various coffee shops and waiting areas ever since. That phrase " ..he couldn't find his own arse with both hands ..", the man is a genius.

Last Saturday I was with J for the weekend and we pottered around Glasgow, ending up in Kelvin grove Museum. I love that place, for some reason every time I go I manage to see something new and this time was no exception. We found the picture I've included for you above. Apparently, this was painted in 1672 by Matthijs Naiveu and is a depiction of a brothel. Right, for the hard of thinking among us ( and that includes moi ) the woman seated is in fact, a prostitute. She is performing on her instrument ( insert completely inappropriate quip here ) to lure her customers into her "lair" as it were. Is it just me or would she not be better just removing one of the 72 layers of clothing she seems to be wearing ? I mean I'm not advocating nudity, some of the top ladies in this industry wouldn't dream of showing their passion cushions on their websites and yet they are still very successful. But really, a skirt down to the toes ? Perhaps that's why there are several centuries between us.

From the past to the future now and you should be able to see that I have done my availability diary from now until the end of October. I will be touring very little in October, that's because I am off to the Isle of Man with Mr. F for five days and then immediately after that, I'm off to Turkey on my family holidays. Two good bits of news on the availability front though - firstly I will be visiting Milton Keynes for one day only on Friday 7th October and will be doing incalls during the day. Also, it is now possible to visit me in Ayrshire, however - this is only if I have met you before or you have have checkable feedback.

Speaking of feedback, a huge thank you to the gent I met today who left me a lovely report here and secondly thank you also to the man who travelled two hours to Inverness to meet me and thrust a box of chocs into my hand. I've eaten eleven of them so far and to be honest I feel quite ill now.

Sometimes I think my ten year old has more sense.

( Fret not, on my time off I spied plenty of material for quality rants, I just need to find the time to comb through them one by one. )
Posted by Unknown at Monday, September 12, 2011 2 comments: