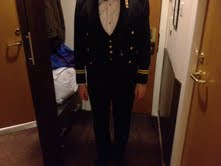 Good evening and greetings from the coldest hotel room, EVER. I'm in Inverness and although it hasn't snowed it sure feels like it's going to, which should make travelling home a hoot. Speaking of travelling, I am delighted ( loike ) to say that I will be in Edinburgh and Brighton next month, Edinburgh is somewhere I've not frequented for a while, although I have been there on outcalls and Brighton is because I want to catch up with a very dear friend.

He and I worked together in a restaurant when I was 16 and to be blunt, I wanted to remove his Calvin Kleins with my teeth. It wasn't to be unfortunately, because late one night after staff drinks I moved in for the kill and he recoiled in surprise. After he'd finished laughing like a drain he told me he's gay. Oh. Never mind, a life long friendship was formed thereafter and I'm dying to see him. Looking back, I can't believe I didn't know he was gay, I mean he's camper than Lily Savage but I guess at 16 I was nowhere near as savvy as I thought.

This week brought tremendous excitement when my phone providers contacted me to tell me my contract was due for renewal. Without delay, I hot footed it down to their outlet and went for the iPhone4, the phone of choice for all self respecting hookers everywhere. I have a Blackberry for my work number but the iPhone is for real life and is brilliant for staying on top of emails when on the move and um ... Angry Birds.

In particular, I was dying to get my sweaty paws on the new innovative Siri, the voice activated software that allows you to send texts, emails etc. without having to key anything in, ideal for those moments when you're already 20 minutes late and haring along the M8. The Apple website is full of promise too, saying - "Just speak naturally. Siri understands what you say."
Brilliant. Except, IT FECKING DOESN'T. I mean since when does "at the vets" become "pantalettes" ? WTF are pantalettes anyway ? Exasperation isn't the word for it, and by the time I've gone back and changed all the words it hasn't understood I'd have been better off typing the whole fecking thing out by hand. ( My Brother, who reads my blog and is a devoted geek, will be absolutely aghast at that. Tough, I've given it three chances now and a final written warning. ) For those of you who simply can't comprehend why I was so irate, I invite you to view this video. ( Absolutely cracks me up every time, I love it. )

Aside from that, the past week has been absolutely awesome and I was up to my stocking tops in bookings with the very epitomy of diversity, just as I like it.

Thurs & Fri - A tremendously interesting and lovely man. We rounded off a very enjoyable session with a light chat on whether we can blame the breakdown of neurotransmitters across synapses for the psychological tendencies exhibited by serial killers. Not your usual post-coital chat I know, but very interesting nonetheless. Also, he said something which will stay with me for the rest of my studies. He's a highly accomplished man and is held in very high regard so I complimented him on his obvious intelligence. "Nothing to do with that, I just work hard. I've never been presented with a problem which I couldn't overcome, simply because I refused to give up." I found that quite inspirational actually.

Sat - An overnight with that Slave Bitch of mine. I negotiated the cobbles of the lanes in the West End once again in death defying heels and had a beautiful meal, after which we adjourned to his boudoir where I made sure that every time he sits down for the next week or so, he'll remember me. *snigger*

Sun - A trip out to Glasgow airport to see a lovely guy I have met before, who unfortunately for him, let it slip that he is in the Royal Navy. BIG mistake. This being a return booking, I insisted that he be in full uniform and he was, phwoooaaaarrr. It was almost a shame to take it all off, but hey ho, needs must. Anyhoo, he has very kindly allowed me both to take and use the above picture of his clobber, which will save me having to go rooting about on Pornhub the next time I'm having a play with my new Magic Wand, more on that later but suffice to say I may never leave the house again.