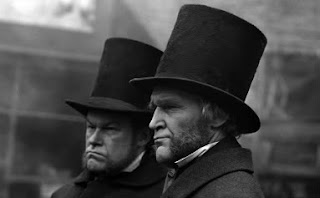 If Thomas Gradgrind had his way, society as we know it would be immersed in facts and nothing else. In the current heated debates which are going on in the press, on the net and all around us, facts would appear to be an alien and unnecessary complication to an otherwise "worthwhile" fresh assertion from the abolitionists and anti's, hell bent on trying to stop the consensual exchange of sex for money.

If you really don't think a misrepresentation can be dangerous, let me give you an example. Say tomorrow I wrote a blog post and said -

Now, anyone who knows me (and my sense of humour, more to the point) would snort with laughter and email me with "ye daft bint". Unfortunately, there are 5 out of every 100 people who would read that blog post and believe it, THAT'S where the danger lies. So when I read such statements on Twitter as "Everyone knows that 14% of all prostitutes in the EU are trafficked", apart from almost making me choke on my jaffa cake, I realise there is work to be done here.

Let me qualify that last statement by saying that I am of course acutely aware that there are fantastic activists out there, fighting on all of our behalves to put the record straight and not just activists, journalists and academics too, witness this article by Nick Davies where he compares the moral panic around trafficking to that of weapons of mass destruction and further, this wonderful piece by Brooke Magnanti, on the more pertinent question of why Scotland should never outlaw the purchase of sex.

But therein lies my internal problem, why leave it to those who have taken the time to properly research and reference their work ? Sure, I can put together a compelling argument based on my years of experience, but it strikes me that when this debate is going to get as dirty as you could possibly imagine, then in the end, cold hard facts are what will win the war.

I could pour my efforts into undermining the "opposition" in their personal capacities but to me, far more can be accomplished by strengthening our own position, rather than hurling accusations at the "enemy". If they want to make themselves look like spiteful malicious bringers of the wrath of doom, so be it. The truth is that I have several academic clients who have been verbally scalding me for not following the blatantly obvious path of fact.

So, the proverbial worm has turned. Just when my pals will be sipping cocktails on the Costa Del Sol and enjoying surreptitious shags in the shade (I really need to get past this alliteration thing), yours truly will be on a lounger in my back garden with several kilos of cat thereon and academic reports to digest and best utilise.

Before I head off into the dark recesses of red bull and anti-socialism, I wanted to draw your attention to the fantastic new national ugly mugs scheme launched by the UKNSWP and with the hard work and dedication of Amy too, it's a credit to everyone involved and a huge step forward in the protection of sex workers.