Pleased to meet you 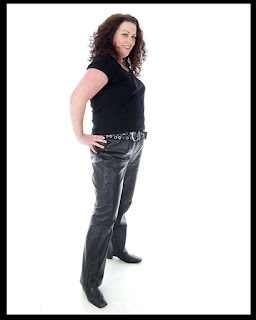 Unless you've had your head in a microwave for the past ten days or so, you may have noticed that I 'came out', by the back door and rather quietly. I knew it was going to happen at some point and in many ways I was ready, but there were some final preparations to be done. Last Christmas I told my family that I was going to go public, and the response was very mixed. Although I have the full support of most, there has been a major rift, one which I'm not sure will ever heal. That hurts.

Upon my return to work, the media were back in force - a piece in The Sun and an appearance on The Stephen Nolan show in Belfast. Coming up I have an interview with a women's magazine and a German television company are looking to film a documentary. And I now have an agent. Yes, really.

The whole thing has felt so surreal for me, I still struggle with the notion that these people want to speak to me. I have been doing what I do for years and suddenly boom. What's that all about ?

The one aspect of media work which I'm finding very rewarding although hugely challenging is my opposition to the imposition of the Swedish model in Ireland, both North and South, and this is why I had to 'come out' to my family. When you film a live studio debate on BBC1 Northern Ireland, since that's the native channel in my home town, I had to prepare my folks. I thought I was prepared, though I'm aware that the anti's in Ireland fight dirtier than I've ever come across before, I'm talking below the realms of acceptability. Lies, false statistics, wheeling out actresses as 'survivors' of the sex trade to speak for them, all of which is of course to protect precious NGO salaries. What I wasn't prepared for, was The Haters.

Some of you who read my blog will no doubt keep an eye on my Twitter feed too, but for those of you who don't, I'm going to copy some of the tweets which followed my appearance on The Nolan Show and which I retweeted on the night. Let me be quite clear on this, I did that not to gain sympathy or support, but because I think it's very important that the general public are made aware of the level of sheer vitriol and hatred there is out there towards sex workers, it's horrid. And I warn you now, the language contained within these tweets isn't pleasant either. Here they are -

paying for sex should be illegal if that stinkin awwl cunt is a prostitute! #BBCNolan

Get a proper job like everyone else you dirty slag #BBCNolan

If you pay for sex with thon article in the studio, the show should be about mental health. #BBCNolan

#bbcnolan that woman presenting prostitution as a viable career choice is such a hideous role model for young women.

#BBCNolan that dragon is woeful looking. Wouldn't ride her into battle

The argument of prostitution would be better swayed with a fit bird. I wouldnt give thon a tesco coupon. #BBCNolan


Shocked ? I was too. Yes, I have some weight to lose, not that it's ever held me back with bookings. Yes, I'm tired, I've been pushing myself to the absolute limit for the past twelve months, balancing escorting, student life, activism and being a mother. There hasn't been very much time for me to just relax in that, at all. Yes, my make up was dire, lesson learned.

To those haters who pointed out that I was shaking like a leaf and musing about whether that was down to Class A drug use, have a word with yourselves. To go on national television, in my home country and without obscuring my identity was singularly the most terrifying thing I have ever done, and when the first question was - "You're a prostitute, aren't you ?" I knew there was no turning back. I'm out now, and out for good. So, if I was shaking it was because I was so nervous I thought I was going to faint, or throw up, I just wasn't sure which.

To those haters who pointed out that one of my eyebrows is a little higher then the other and referred to me as a 'spa', my left eye has permanent nerve damage thanks to my violent ex-partner and so tends to droop a little, especially when I'm stressed or tired.

You see, my job in going into the studio that evening was not to win over Lord Morrow, that's never going to happen. Neither was it to win over the presenter, he was there to do a job, and he did it very well. No, my job that evening was to get the audience on my side, and I believe I achieved that, with the exception of the young guy who called me 'disgusting', although that didn't come over in the audio.

I don't want you to lose faith though, ever. For every hater there are three people who sent me messages of support, including some journalists who follow me on Twitter, one of whom wrote - "no human being deserves to be spoken to like that".

I also don't want you to think that I've been dissuaded from fighting for the rights of sex workers, not at all.

In the aftermath of the show I met up with Mark Pollock, a truly inspirational man and an example to us all. We chatted about representing minority groups, facing the media and overcoming personal obstacles. In fact we were still chatting at 2.30am, he is a fascinating person and I was just star struck by his sheer positivity.

Positivity is indeed the way forward, Haters - and in the words of Christina Aguilera, "Thanks for making me a fighter".