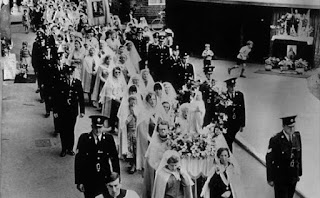 Ironic, isn't it, that my first bout of 'sex education' came from a Catholic nun, Sr. Noreen, or Boreen Noreen as she was affectionately known. Noreen was a kind soul and deeply uncomfortable with the subject matter. Mortified, she explained that sanitary towels were always to be worn with the sticky side down, because to fail in that could lead to abject discomfort.

I say ironic because on International Women's Day, I was listening to the Sisters of Mercy try to defend the indefensible with regard to the Magdalene Laundries. I very nearly pitied them. Until I remembered that the same order of nuns responsible for the atrocities committed in the laundries are now the chief anti sex work protagonists in Ireland. Now known as Ruhama, the same nuns that bullied and victimised those 'fallen women' for generations are still at it, although if the interview I just heard is anything to go by, it's nothing to do with funding, it's from the goodness of their hearts, obviously. You'd have to wonder then, exactly what they've done with over fourteen million euros since 2006.

Asked about whether the work the women endured in the laundries was 'slavery', the nuns replied, with regard to prostitution - " The women who work in our towns and villages today, that's slavery. Doing stuff you don't want to do under coercion". That was a pretty impressive deflection attempt, but nowhere near successful. The fact remains, the Magdalene women were forced to work long hours, and (allegedly) had to endure physical, mental and sexual abuse. They were separated from their babies, their families and their friends and in some cases became so institutionalised that the only solution was for them to remain in the laundries until they died. If that's not slavery then I don't know what is.

To refer to sex workers who choose to travel around Ireland having consensual sex as slaves is erroneous and quite frankly, offensive. I say offensive because it paints a picture of poor vulnerable women who can't or won't choose their own destinies and are at the mercy of abusers. Not true. The vast majority of women in prostitution in Ireland are there by choice and are more than capable of controlling their own lives, I know because I am one of them and have met many others, over many years.

The nuns who were being interviewed were then asked about their decision to remain anonymous and their reply was very interesting to say the least. They said that they are being 'cast out into the desert to get rid of the stigma' and that should their identities become known, they would be 'stoned'. What about the women who were cast out of society for the 'sin' of bearing a child ? Those women had to endure stigma as do the many sex workers in Ireland today. It also begs the question, if the nuns are so resolute in their claims of innocence, what have they got to hide ? Why the secrecy ?

One question I was very interested in the reply to centred around funding, and they were asked what became of the money that was earned in the laundries. They replied that it was used to pay for the keep of the women and that actually, the nuns led very frugal lives. How odd then, that I can easily source a report from The Irish Examiner which estimates the wealth of The Sisters of Mercy at €1.6bn. Having regard to that figure, can anyone really claim that an award of compensation of €200,000 per victim is excessive ? How can one begin to quantify the pain and suffering those women endured, losing their precious babies and years of their lives ?

Further on in the interview, the nuns went on to explain that as a society, we are "looking with today eyes at a totally different era". Therein lies the ultimate irony, because I believe that unless Ruhama and their co-abolitionists are stopped from State sponsored bullying of sex workers, then another apology from Enda Kenny's successor will not be enough. As an enlightened and modern society, the oppression of Irish and migrant sex workers can no longer be justified.

Labels: Magdalene Laundries, Proposal for a Bill to make it an offence to purchase sex, Prostitution, Ruhama, Sisters of Mercy