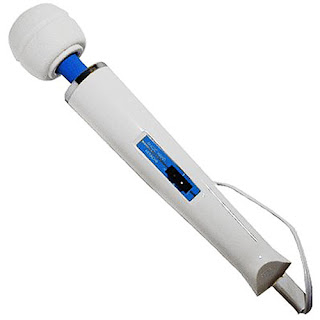 As achievements go, masturbating myself into my local A & E has never really been up there on my 'top ten to do before I die', but achieve it I did. Y'see, recently it was my birthday and ever the kind soul that he is, one of my long standing clients in Belfast asked me what I would like. No contest, I asked for a Hitachi magic wand. For those of you not familiar with said device, in terms of stimulating a woman, it gets you from nought to sixty before you can say 'HEADS' - on the break during Coronation Street.

Eager as I was to try my new toy, I rushed back to my hotel room and sure enough, found that euphoria in record time. There was just one small problem, I developed a very bad headache, to the point where I thought it might be a migraine, although I've never had one of those in my life. So I darkened the room and lay down and in time it passed. Fast forward some two weeks and I'm demonstrating the benefits of a wand to a bemused client in his hotel room, rather like a late night shopping channel, naked.

With the rush of fluids and moans and all things gorgeous which go to prove that the good lord did indeed intend us to have sex ad infinitum - came the worst headache I have ever had in my life. It was at the back of my head and was pulsating, literally taking my breath away. What to do ?

As it happened I had a routine appointment with my GP several days later and gingerly raised the issue. She said she was going to consult with her colleagues and call me back, and in the meantime I was to find something to keep me amused 'above the waist', as she delicately put it. So, I threw my case into the boot of my car and hit the road for Inverness, as had been the plan. Having just reached the bottom of the A9, the phone went and it was my GP.

And so it was that I found myself flat on my back for five days, whilst they ran test after test to ensure I hadn't ruptured something or was in danger of doing so. The first day or two were great, and the novelty of having a television and a bed all to myself without -

...was delicious. In time though, I got so bored, I thought they were going to have to transfer me to the psych ward. Finally, on day number five, the most goddamn beautiful doctor I have ever seen in my life came to see me. I was good to go, he explained, but my stress levels were through the roof and that's what was most likely contributing to the headaches, chest pains, racing heartbeat and insomnia. (I know, I know.) Rather predictably, I phoned my Dad.

"Hola Padre, I have seen the error of my ways and am coming home. I plan on checking myself into a convent where I shall self flagellate for the rest of my pitiful existence."

"Hilarious. See you on Saturday".

So we sat, my father and I for some considerable length of time and deep into the night in his garden, chewing the fat and contemplating what needs to change. I know that ideally he'd like me to go and work in an animal sanctuary for the rest of my life, but for the moment, that's not going to happen. Nope, I'm going to have some fun.

I'm taking June until October off study completely, although I had originally planned on doubling up on modules. I'm going to let my hair down and I'm going to chill-the-feck-out. So, for those of you wondering why I have suddenly organised a group session in Glasgow, it's because I want to, it's something I thoroughly enjoy and if it goes well I will do it again.

Before I sign off, let me just say a HUGE thank you to everyone who phoned, texted and emailed after Sex on Wheels. I have no regrets about doing it at all, I think it's an important issue which needs to be addressed and I will continue to campaign as hard as I can. The only regret I have is when they filmed me speaking to a potential client on the phone and saying - 'I'm closely trimmed'. I'm sorry, but that information is not required to be known by the disco mummies, my neighbours and very definitely not my Dad. Memo to self - in future when the camera is rolling - astound everyone by simply SHUTTING UP.

P.S : My availability diary is now done until the end of July, although subject to change. I will be in both Leeds and Bristol so do drop me an email. 'Tis about time I ventured South to see what all the fuss is about.