They shoot hookers, don't they ? 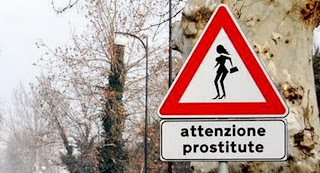 Guest post on the recent shootings of sex workers in Baghdad.

They certainly do in Baghdad.

But where is the outrage from the Fem Nazis? Where is the team of ‘British specialists’ sent out to Baghdad to investigate by our Prime Minister David Cameron? Where is Michelle Obama gormlessly holding up a #BringBackOurGirls sign? Where is the hysterical Twitter campaign?

Perhaps if we were to relabel those women as ‘vulnerable victims of evil sex traffickers’ their death might attract more sympathy? As independent women, standing tall amidst the chaos of Baghdad, supporting themselves, not relying on some well funded NGO organisation to ‘rescue’ them, or a politically correct British barrister to demand the removal of their ‘demeaning’ burka, they were, as with the proverbial British Rail ‘wrong kind of snow on the line’ – simply the ‘wrong kind of women’ to be deserving of the ritual hand wringing on the six o’clock news.

A year and a day after the infamous ‘Swedish model‘ killed Petite Jasmine, on 12 July 2014 Iraqi abolitionists gunned down 29 sex workers in an apartment building in Baghdad.

That is exactly what happened, in simple words.

An abolitionist is an abolitionist, and an extremist is an extremist whether Radfem or Muslim. It is a little bit moot whether you kill someone with a bullet or by making their lives impossible while cranking up the stigmas with hate speech (the preferred method in Europe and America).

You are still just as dead, and in my honest opinion the bullet is quicker and cleaner.

This is not hyperbole either, on 8 July the French Senate voted to remove the clauses penalising sex buyers from proposed legislation, leaving behind only decriminalisation and provision of exit resources. Their argument was that, properly examined, it is clear that ‘Swedish model’ legislation does not work in terms of reducing the sex industry, but has a significant negative impact on sex workers and places their safety at considerable risk – just common sense really.

The remaining argument to be made against that by abolitionists involves attacking sex workers head on, much as beauty queens were once attacked, as complicit enemies of gender equality. A few days ago that seemed a good thing that would show the true viciousness and callous indifference of the abolitionist movement for what it is. Today I am not so sure.

“The apartment complex is known for prostitution and in the past prostitutes have been the targets of extrajudicial killings there by Muslim extremists. It was not clear if that was what happened this time. However, if the targets were prostitutes, it is unlikely that would cause the kind of backlash that a large-scale sectarian killing would.“

People know very little about Iraq. It has often been presented in the media as a primitive country not unlike the Yemen. In the real world, Iraq, land of the Tigris and Euphrates, was the cradle of civilisation, and its indigenous people and culture are more closely related to the Jews than the Bedouins, while being unique and very different to both.

Regardless, you can forget any image of Iraqi sex workers as illiterate peasant girls. It doesn’t work that way in Iraq.

Some of it is exaggerated, most of it is spun to agenda, except for the noticeable absence of anyone with the raw cheek to suggest that ‘ending the demand’ would be in any way helpful.

(Listen to their stories, where on earth would any ‘Swedish model’ fit in constructively?)

What I want you to take in is the element of ‘same old…same old’ particularly in the videos.

They were my sisters and they were yours, just as much as Jasmine, and they are just as violently dead. I cannot help wondering about the coincidence. The first anniversary of Jasmine’s death fell on a Friday, the Muslim holy day, and I am not sure how that works. It may have the same weight as the Jewish Sabbath with some Muslims.

If ever there were a clearer message that *STIGMA KILLS* I have not seen it.

…and the Western Press brushes it under the carpet. So far the UK and Irish press are mostly ignoring it apart from a brief piece in the Telegraph. The Irish Times makes reference to the death of ’29 women in an apartment block’ but no mention that they were sex workers, despite the fact that ‘punished for prostitution’ was written on the door of the building like an edict.

The BBC went with ‘At least 20 of those killed were said to be women’ - ‘said to be women‘? Obviously not the ‘right kind of women’ for anyone to be sure! ‘The motive for the killings is not clear‘ continues the BBC copy – despite then quoting:

Writing left on the door of one of the buildings read: “This is the fate of any prostitution,” AFP news agency reports.

Locals in Zayouna have accused Shia militias of killing women thought to be prostitutes, Reuters news agency reported. The neighbourhood is a mixed district of Sunni and Shia Muslims.

A brothel in Zayouna was attacked in May 2013, with seven women and five men shot dead.

Only for the BBC is the motive ‘unclear’…

Of course there is a punchline that changes everything. I have done a lot of research no journalist seems to have bothered with today.

Several European services regularly book tours for ‘Escorts’ – another euphemism – in Iraq, there is also some evidence of British sex workers operating in Iraq.

Stand by for the hysteria when it is discovered that one of those murdered women was a British passport holder, a ‘child’ no less, enslaved by evil jihadists…until then…