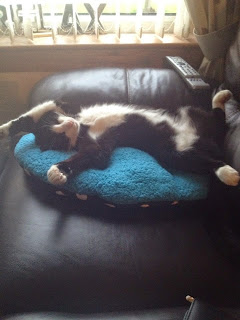 This week's blog was intended to be a less than gentle poke at Turn Off the Red Light, or Turn Off the Altar Light as they've become known in better circles. Unfortunately, circumstances have dictated otherwise.

My regular readers will know of my love for Boy Cat, who chose me at the cat rescue centre. For those who didn't read back that far, he was the runt of a litter comprised of himself and three big ginger bruisers, and he chose me, there's no doubt about that. When the centre manager opened the door he came straight to me and I knew he was my boy. We bonded from the offset and I cheered him on as the underdog.

It's safe to say we had our trials and tribulations over the years, I had him for eight years and we went through three house moves, his being locked in a church for five days and then getting a belt of a car/ned and under going emergency surgery to repair a ruptured bladder. I hit the knees that night, and no mistake. I prayed, and he came home, skinny and weak, but home.

Thereafter, he developed a habit of doing a disappearing act, from my new property. In the beginning, it was for two days max, and he would stroll in, so I was of the opinion that he had a second home where he was meowing loudly at the back door, not unusual for Tom cats. In the run up to Christmas, he did a bunk again, but this was long term. I knew something was wrong, but I really didn't know what to do. I spoke to all of my neighbours and asked people to keep an eye out for him. He had gone missing with a beautiful black sparkly collar and spotted bow tie, so I felt that at least he would be instantly recognisable.

Come the new year, there was still no sign of him and I knew something was badly amiss. I contacted a local cat rescue project to find that a black and white cat had indeed been found in an awful state and brought in by the SSPCA, to an emergency vets. I'm going to spare you a lot of the gory details, he suffered a terrible death. What I can tell you, is that he got his front paw stuck underneath his collar and as a result basically starved. The SSPCA battled through the night to save him, but he was so badly injured that it was decided it was better to put him to sleep.

I went to identify him on Friday, an experience I wouldn't wish on my worst enemies. It was very difficult, he had horrific injuries. But at least he looked at peace and I got to say goodbye. I will always miss him, he was my friend and comfort, and I know he loved me with ferocity too. I'm okay that he died, he's at peace. I can't bear that he suffered, he must have been so frightened.

The reason I shared this is not to evoke sympathy, it's to implore you - if you have a cat and they go outdoors, please DO NOT put a collar on them. Even the collars with a so called emergency release, useless. By all means, microchip them but collars? NEVER.

P.S : Note to abolitionists - please do not take a period of grieving as an opportunity to try it on, I'll still nail you to the wall. Twice.
Posted by Unknown at Sunday, January 18, 2015