Church leaders call for the Nordic model in Scotland. I think not. 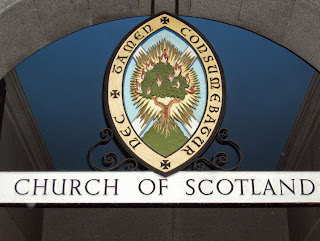 Last week saw a calling for the implementation of the so called Nordic model by none other than church leaders.

As the sex workers' rights movement grows stronger across the UK, sex workers become incensed when others speak over our heads. It is condescending in the extreme to have so called "experts" tell us what is best for us. After all, we are experts on our own lives and industry, so we know that actually, decriminalisation of the archaic laws currently in existence would be ideal. This would allow us to work together for safety and reduce any harms associated, which should surely be the aim in dealing with any minority group under threat from would be attackers.

Whatever about the emergence of various "rescue" agencies purporting to be available to assist women in exiting (when actually, it's funding rather than exiting which lights their fires), what's more maddening is when the church becomes involved.

I'll say it boldly, when two consenting adults have sex behind closed doors, then whether any money changes hands or not, that is none of anyone else's business, least of all, the Church of Scotland. It would appear that the various church leaders have been hoodwinked by abolitionist groups with their hands out for government coffers, an all too common occurrence.

As a result, they have been led to believe that trafficking for the sex trade in Scotland is rife, out of control even. It isn't. Seventy per cent of sex workers in the UK at present are mothers, just feeding their children in a recession, and to take the very last hope those women have of survival away from them is just unforgivable.

Trafficking does not exist because of the sex industry, it is a separate entity and also serves the childcare, domestic servitude, restaurant and agricultural sectors to name but a few. It's worth noting that trafficking is already an offence, so shouldn't we be looking at our enforcement structures rather than further legislation? The World Health Organisation, UNAIDS, The Lancet and HIV Scotland have all come out in favour of decriminalisation as an effective method of harm reduction. Jean Urquhart MSP added her voice to the support for decriminalisation too, saying -

"Human trafficking is one of the most heinous crimes there is, and eradicating it will take a serious response, drawing on the best evidence. This effort to piggyback a knee-jerk, moralising reaction onto vital human trafficking legislation is deeply unhelpful.

"The ‘Swedish model’ that the churches call for in their letter cannot demonstrate any success at all in reducing trafficking. What it does do is put sex workers at greater risk of violence and sexually transmitted infections, which is why sex workers and international health organisations alike oppose it.

"What would absolutely help protect both sex workers and migrant workers from coercion and mistreatment would be measures to guarantee their labour rights. The better supported and organised both groups are, the safer they will be and the easier it will be to detect and prosecute crimes like trafficking."

In the end, all good laws must be based on evidence, evidence which is in abundance here. The ideological and misguided (to put it kindly) stance of the church leaders must be ignored.
Posted by Unknown at Wednesday, February 11, 2015