On the road again and Orangutans 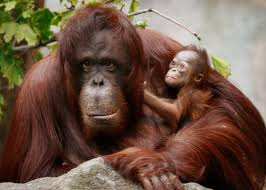 Good afternoon, having been purple, then blue, green and finally a very fetching shade of autumnal yellow, I'm back. I cannot begin to tell you how good it feels to be going back on tour tomorrow, I thought I was going to go stir crazy at home. ( Amanda suggested a live feed but I told her quite bluntly what she could do with that idea. ) It was quite something when the dressings came off, suffice to say that I don't know what I'd do without the wonderful support of my family and friends.

I used the time wisely and caught up with some studying, lots of sleep and finally finished off the piece I was doing with a journalist in Edinburgh. She wanted to do a "day in the life" of an escort and I wanted to talk about the nonsensical legislation, so we met half-way, although I haven't seen the finished article yet.

I mentioned before I went off that there was an article in the Daily Mail which raised my hackles, ( quelle surprise ). There's a link to the article here ;

I did compose a response but it never appeared, humph. Happily, a gentleman who reads my blog sent me an email in response and I have his permission to share some of the content with you ;

Like you I was disappointed at Melanie Phillips column in the Daily Mail(which I do normally read- tune out the worst of the rabble-rousing and it’s a good read). Like so many commentators who pontificate on the subject she apparently sees nothing wrong in being very selective in what aspects she selects to support her arguments while disregarding vast swathes of information that doesn’t suit her purposes.

For a start I’m baffled how on earth she can claim that Chloe from the X-Factor is glamorising prostitution- class and glamour are not the first words that come to mind when I see a photo of her! As for banning her from the programme, something that no-one(either for or against) that I saw mentioned in that debate was how Simon Cowell could have prohibited her from working while appearing on the X-Factor given that prostitution isn’t illegal. Would have been an interesting case if she’d taken him to court for attempting to restrict her earnings. Although I think it unlikely that she was declaring her income to HMRC...though they’ll be taking an interest now!

Like so many writers on the subject Phillips has picked out examples of escorts from the media that her readers will be familiar with, while using the figures about street workers drug habits, pimps and being victims of violence to reinforce the poor image of sex industry workers.

She claims that one of the problems with prostitution is that “it treats the female body with at best indifference and at worst contempt.” I accept that my experiences and my mentality about it won’t be the same as all punters, but I certainly wasn’t indifferent or contemptuous about the ladies I met(I defy any man to be indifferent when alone in the boudoir with Dollymopp...), and I hope they felt the same. I like to think that attentive and pleased would be better descriptors.

It’s been mentioned before how these ardent feminists rabidly shoot down any comments or arguments that don’t agree with their viewpoint- “you’re involved so you don’t know what’s best for you”, “as a man who buys women you’re biased” or “you’re a man so you can’t comment on this” for example(the latter 2 I’ve had thrown at me when I’ve commented on various stories. And no, I don’t buy women, they’re kind enough to allow me to spend some time with them), Surely feminism started because women wanted to make their own mind up about what they want to do and how they do it? Rather than as we have now, being told by other women(as opposed to men) what they can do.

Phillips also writes that it’s terrible how morals are changing so that things that were previously frowned upon such as prostitution, having kids out-with marriage or homosexuality are now being accepted. I find this interesting in a paper that also rails(rightly in my opinion) against current day politicians issuing grovelling apologies for slavery, Empire etc on the basis that standards, morals, call them what you will, have changed over the last two hundred years and so can’t be judged as immoral by us now from our different standpoint. Things change, and by not accepting that we hold ourselves back.

One of the final lines from Phillips, which I feel sums up both her article and modern aggressive feminism was “these early feminist warriors all agreed prostitution was a form of slavery.” Then as now, nobody seems to have asked the ladies themselves what they thought...

Very well said Sir, and thank you for your kind best wishes too. :)

While I'm at it, thank you to everyone who has sent me get well wishes, I really was and am very touched. I now have enough Thornton's chocolate to open a small wholesalers, but am down to the coffee ones that no-one likes, although girl cat licked a couple of them, ( we were recovering on the sofa together). I really must review hygiene standards in this abode of mine.

Tomorrow I'm off to Carlisle with Spandex Susan ( her new title ). After that it's Belfast and then up to Inverness with Amanda too, I cannot wait to be with the girls again, I've missed them so much it's unreal, although of course I will deny that vehemently. ;) A card arrived this morning from Bristol BBWClaire with a very rude key-ring therein, it had me howling with laughter, nutty woman. Thank you.

Ok I'm off to pack my frillies and commence the longest beauty session in history, so that I begin to resemble a woman again as opposed to an orangutan.