On the subject of disabilities 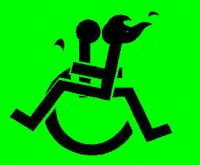 (The following blog post contains graphic scenes of sexual contact with disabled persons, reader discretion is advised. If you think you may be affected by any of the content contained in this blog post, I suggest you feck off and read a blog about flower arranging instead.)
I have a client I see from time to time, let's call him 'K'. K is a young guy, very handsome, always spotlessly clean and smelling like heaven on earth. His emails send me into convulsions, he has the most amazing sense of humour and his wry observations on the topics of the day would outdo many contemporary writers.
Like most men, one of K's favourites is fellatio, he likes nothing more than for yours truly to peel off the layers down to lingerie with stockings and suspenders and get to work. He lies back in blissful abandonment, and enjoying every moment.
Every so often, I get a swift blow to the back of the head, something I'm accustomed to now. We seem to have developed a ratio around the whole experience, for every three or so thumps, there is one "sorry". K can't avoid smacking me, because he has very limited motor control of his limbs as a result of his cerebral palsy. In the end, we both usually end up in fits of laughter at the absurdity of it all, because that's all we CAN do really. How wonderful.
Many years ago and in a brothel far away came an elderly man and it's fair to say that he frightened small children (to coin a phrase) because he had developed a form of mouth cancer which back then, very little was known about. His treatment at the time involved cutting the offending tissue away, which meant that on one side of his face his cheek was missing and if you looked at him from the side, he looked like a sinister, grinning skeleton. His wife had died some time previously and as a result of his appearance he lived as a recluse, going out only every couple of days for messages. Once every couple of months though, he took a taxi to the parlour where I worked and I knew what he wanted.
I would thank him for my chocolates, light some candles and play some soft music. After that, he would drown me in baby oil and massage me from head to toe, every so often dipping his head just to inhale my perfume and bury his face into my neck. That was his treasured contact which he looked forward to so much. After about a year and a half of our appointments I moved to London but to this day I still think of him, a true gentleman in every sense of the word.
All of which leads me to the question, if the purchase of "sex" is banned, then what will become of those men who rely solely on sex workers for their needs, whatever they may be ? Can you honestly foresee a day when that elderly gent will be able to join a dating site and find a woman for a massage and a cuddle ? And what of K ? Will he ever meet a woman who can meet his needs and see beyond the exterior ?
It really angers me when I read the views of various writers who paint a picture of my clients as insatiable lust driven animals. A lack of knowledge on their subject is no deterrent to most of those critics. Let me be quite clear here, it's not a question of entitlement, not at all. No man is entitled to claim a sexual act as his right. On the other hand, I do believe that disabled clients ought to have the same opportunities as their able bodied counterparts, that's the differentiation.
If Rhoda Grant's new proposal is adopted as law, it will be a shocking indictment on just how small minded and blinkered we are as a country. It's time we recognised that not only is it impossible to "reduce demand" but also, "demand" is a very complex and multi-layered animal, as indeed is "supply", (best described as diverse in the extreme).
Frankly, were I a purchaser of "sex", I know I would find the notion of an ill-informed politician telling me what I can and can't do in the privacy of my own bedroom downright insulting. Ironically, to condemn those men I have written about to a life of solitude and loneliness on foot of a Victorian attitude towards the exchange of sexual services for money is hugely immoral in itself.
Posted by Unknown at Thursday, September 06, 2012