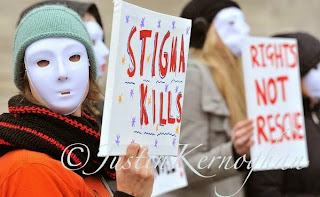 I'm not going to lie, the last week has been a challenge, and by "challenge" I mean I felt like I was locked into one of those real life horror houses with blood drenched actors. Monday 20th saw a vote in the Northern Irish Assembly in favour of Lord Morrow's human trafficking bill, clause 6 of which effectively imposes the Swedish model, making it illegal to pay for sex.

In real terms what it means is this - the Justice Committee ignored the evidence of the World Health Organisation, UNAIDS, respected publication The Lancet to name but a few, all of whom are in favour of decriminalisation, because it has been shown that further criminalisation does nothing but further harm those most at risk in the industry. But worse than that, they ignored the voices of those of us at the centre of the debate, sex workers. The Department of Justice commissioned research found that a staggering 98% of sex workers did not want this law, and that's not just in reference to internet savvy "happy hookers". The researchers interviewed those who had really suffered as a result of the industry, and STILL, they said no to further criminalisation.

In itself, ignoring sex workers is bad enough, but Paul Givan and Jim Wells took that one step further. As head of the Justice Committee, (he has since lost that role), Givan felt it was appropriate to quiz me about my personal sex life, my relationship with my dad and he also alleged that I target vulnerable disabled men. In a final act of arrogance, he said that "some of us don't need any evidence". When the head of a Justice Committee says that, it's time to become terrified. His colleague Jim Wells was equally horrid, as far as he's concerned there can be only vulnerable victims or members of the pimp lobby. No such thing as a sex worker who works independently to support her family and happens to care for the welfare of other sex workers then ? Don't be silly. That Jim Wells has now been appointed as Minister for Health in NI is just depressing, he as shown complete contempt for women over and over again, together with just about every minority group you can think of.

So who in their right minds said yes to a model proven to harm ? Well, CARE had a lot of influence here, as a fundamentalist Christian group they pledged to set up sheltered housing to save "fallen women" in case we become, and I quote, "drug dealers". I'm not sure if the model of locking up "problematic" women whilst enjoying massive government funding is ringing any bells with you, but it sure is with me. I'm terrified that this will be the outcome. All through the process, I appealed to Lord Morrow's good sense. Sure, he can refer to himself as the "hand of Wilberforce", but for me, it takes a very brave man to stand up against the puritans and say - "Erm, trafficking is already an offence. Rape is already an offence. The PSNI don't want this law, the Minister for Justice doesn't want this law, and crucially; sex workers don't want this law, so why are we even looking at this ?" That is exactly the stance that Basil McCrea and several other MLA's took and they will forever have the admiration of all of us who worked so hard to have the law stopped. Quite why the UUP and Sinn Fein did a last minute about turn, I'll never know, but I was bitterly disappointed and angered by their stance.

So what now ? Now we're faced with a situation where sex workers are afraid to liaise with the police, afraid to take on new clients who may or may not be testing the waters, and this in spite of the fact that the bill won't actually become law until Spring. Amusingly, there was a last minute amendment tabled which decriminalised the women working on the street, I guess this is the carrot they feel they can dangle. The reality is this, we are still not decriminalised in that we cannot work together for safety, so any chest beating they are doing around that safety element is, I'm afraid, complete crap. No, their idea is to force women out of shared apartments where they work in safety and on to the streets. Why ? So they can be rescued, by the rescue industry with their funding applications at the ready. That's why. "Put them where we can see them, that boosts our figures and justifies more funding". The reality is that if two women work together for safety in an apartment in Northern Ireland, they are both deemed "victims", but can BOTH be convicted of "pimping" from each other. So we are compelled to work alone, and in danger since 81 MLA's made it abundantly plain that they couldn't care less what happens to us.

And that, I'm afraid, is what it really has come down to. Sex workers in Northern Ireland are seen as no more than a tool to elevate political status and line the pockets of those already profiting from doing very little for the very desperate.

Though these are sad and frightening times, we can't give up campaigning for real decriminalisation, and for good policing practices. Whilst Ruhama and Turn off the Red Light continue to pocket hundreds of thousands of tax payers money obtained through lies, and whilst sex workers struggle to feed their children in a recession, there's work to be done.

Labels: DUP, Jim Wells, Paul Givan, Proposal for a Bill to make it an offence to purchase sex, Ruhama, Stormont, Turn off the red light