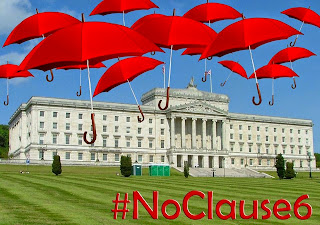 Tomorrow (Monday 20th October) the Northern Ireland Assembly will vote on the Human Trafficking and Exploitation (Further Provisions and Support for Victims) Bill. Clause 6 will criminalise the purchase of sex, between consenting adults.

This Bill has been put forward by the DUP (Democratic Unionist Party) backed by the fundamentalist religious organisation CARE (Christian Action Research and Education). CARE's solution is to "rescue" sex workers (heavily funded by the government) and lock them away in secure housing in case we become "drug dealers". Is that 'solution' not ringing any bells ? Women’s Aid have also given their wholehearted support to this Bill. Women’s Aid claim to represent ‘women’ but like the nuns in the Magdalene laundries before them they are putting their brutal ideology and financial interest over those of us in the sex industry who choose what we do. Women’s Aid have never engaged with sex workers nor have they shown any inclination to do so. Our views and opinions are aren’t worth a grain of salt to them. Women’s Aid need to remember that it was the issue of ‘choice’ that defined the feminist movement and by aligning with the DUP on this issue they have set the feminist cause in NI back decades. Will Women’s Aid now be joining the DUP to have the Marie Stopes clinic shut down? And this is choice ?

Sinn Féin, the second largest political party recognises that this Bill is flawed insofar as it is based on ideology not evidence and will lead to an increase in risks and dangers to sex workers. But Sinn Féin MLAs haven’t held firm to what they know to be true and are unlikely to oppose it. Thus it will pass.

The Department of Justice published independent research into prostitution in Northern Ireland on Friday 17th October clearly showing that criminalising the purchase of sex will not achieve the stated aims but will harm sex workers. Crucially, this research took the views and opinions of sex workers into account, a first for NI. However, Northern Ireland’s politicians are ignoring the evidence and throwing sex workers under the bus. Will sex workers in NI have to wait decades for an apology just as the Magdalene women did ? Or will that apology for bad law making come after the first murder, or fourth serious assault perhaps ? It remains to be seen, but they cannot for a moment pretend they didn't have the evidence available to do right by an already marginalised and stigmatised group. Sex workers will suffer, and it could have been prevented by the courageous actions of a few. Instead we have been let down by the cowardice of many.