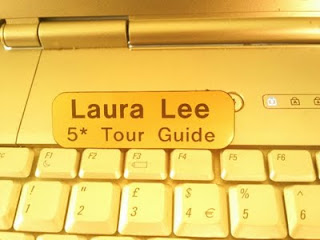 I think I'm turning into my Mother. Not the nauseatingly annoying bit, but I hear myself say things and it's like turning the wheels of time backwards 25 years.

"I'll give you a real reason to cry in a minute".

"Don't come crying to me when you've been knocked from your bike and killed because you wouldn't wear the reflective arm bands."

If some kind soul could email me a link to the current suggested school curriculum I'd be very grateful because I think the education system has a lot to answer for. Take last week for example. I committed the horrid atrocity of actually asking my little treasure to tidy her room unaided, since I had already brought the cleaning equivalent of a JCB through it twice. Cue an unmerciful row which culminated in tiny hands being applied firmly to hips and then the clincher ;

"I may be small but I have a voice and I deserve to be heard."

Well, suffice to say that the only voice to be heard in the immediate aftermath was mine, at a pitch and a volume that had my kitties diving for cover in the broom cupboard.

Last Thursday I thoroughly enjoyed an overnight with Mr F, we had food to die for and he bought me a beautiful pair of earrings for Christmas. It just goes to show how much I trust him, one of the earrings went straight through but the other ear has semi healed over. So I took a large mouthful of wine ;

Many howls later and we still couldn't manage it so I need to get that one pierced again. Oh joy. Anyway, the next day we were both attending a social lunch which was superb. Beautiful food and the best of craic. Big Rick was there too and I think he was a little nervous as it was his first social but as it was a daytime meet it was relatively civilised, the next one will be a haze of doubles, hehe. The last time I was in Aberdeen Rick gave me a pressie and I've attached a picture. It's a name badge which says " Laura Lee, 5* Tour Guide ". How cool is that ? I wore it with pride at the social and will do so at future events too. :)

From the social I sprinted home, did a handstand in the shower and set off to meet Mr A for the weekend. I have long made it my mission to put the "f" back into sex, by which I mean fun. Why does it have to be so goddamn serious ? Some people approach bedroom olympics like a military operation. The second part of that mission is to bring a sense of perspective back into "Senior Management" types. I have very happy memories of perching on an armchair in Glasgow one night with my client seated at my feet. He was using management speak and waxing lyrical about the expenditure for his latest project, so I kicked him over.

"No-one has dared to give me cheek for years, let alone kick me. Thank you."

So back to Mr A. We were enjoying champagne and strawberries when he started to wind me up. ( He does it very well. ) The closest thing to hand was a large scatter cushion so it was duly fired in his general direction, but missed, and instead took out several glass tumblers. Now, most people would have stopped there but for all his management training he has obviously glossed over the chapter on "When to concede defeat," and so it went on until neither of us had any energy left.

It was a wonderful weekend which we both thoroughly enjoyed. :)

This week sees me heading off to Dundee on Wednesday and Thursday before landing in Edinburgh on Friday. I shall speak to you from there.