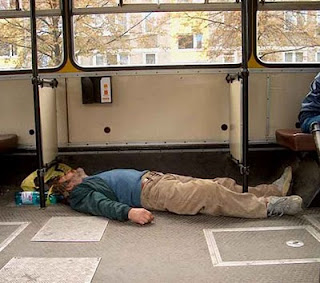 Good evening and greetings from Ayrshire where I've arrived back from my Christmas break. I'd like to say I'm refreshed but actually I'm shattered, I had a horrendous journey back through ice and snow with deer bouncing about too, it felt like an endurance test more than a drive which I normally enjoy.

I boarded the boat in Belfast and noticed a very drunk man with a bemused looking Jack Russell on a length of rope making a nuisance of himself at the Ferry Terminal. To my horror, they let him on. As the journey continued he became very aggressive and confrontational to the point where the staff had to ask him to pipe down and sit down. When he started nutting the bar in protest because the staff wouldn't serve him any more alcohol, it became far too much for those of us who weren't drinking because we had long drives ahead of us and were trying to catch forty winks. Suddenly an announcement came " If there is a member of the Police on board, could they please make contact with Guest Services. " Ferking hell, that kind of announcement is usually only heard when someone is in need of medical attention.

Some fifteen minutes passed, followed by another announcement. " Ladies and Gentlemen, due to a disruptive passenger we will have to turn back to Belfast so that the local Police force can remove the passenger in question." I heard that and thought "Eh ?", so I approached the reception desk.

"Err, can't you restrain him like they do on flights ?"

"Not really, we would have to take him back to Belfast anyway. There is a policeman on board but he is off duty and doesn't have the means to restrain him."

I indulged myself in a deep sigh coupled with some quick thinking.

"Ok, I'd rather it wasn't advertised, but I have some handcuffs in my car below deck if you need them."

( I toyed with the idea of telling them about the other wonderful restraints I had in 'that' suitcase in the boot of my car, but decided the time wasn't right or appropriate )

Cue several eyebrows raised so high they could plug the Ozone layer. Hell, I was just trying to help.

In the end, turn back we did and I didn't get to port until 12am and then home on black ice at 2am. Oh joy.

Thanks to everyone who sent me emails about my Sis, she's doing ok, staying positive and has an operation scheduled for the first week in Feb, so only time will tell. :) I'm trying not to dwell on it and buy into her positivity.

Ok, on to the next subject; pricing changes. I have changed my incall rate for one hour to £150, two hours will be £250, three hours £350 and so on. This is in keeping with industry norm and is a reflection of the fact that wherever I am seeing you on an incall basis, it's always a rented property so I need to consider my costs. Before you go off the boil, let me just point out that I have changed the pricing for a dinner date from £450 to £350, so that's 4 hours in total including dinner. Also, for the month of January I am having a "January Sale" ( Gawd, how crass ) on overnight bookings and they will be £550. So it's not all bad. :)

I'll leave you with a conversation I had with my Dad over Christmas.

Dad and I have this game where we try to out - gross each other and to date the score is pretty much 50 : 50.

"So Dad, how's the sex life, anything occurring ?"

"Right, so none then. Why don't you pay for it like everyone else ?"

"That's not even remotely amusing."