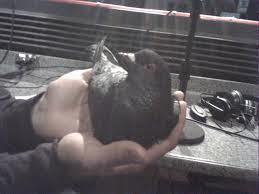 Evening all, greetings from home where I am chilling out avec moggies.

First things first, hurrah for The Highland News !! They ran the story last week and reported accurately and fairly, I think all of us who were mentioned were very impressed and pleased with the article. Less impressed, it would seem were the womenfolk of the West Coast. One of those lovely ladies placed a call my way last night which had me creased up with laughter. Thank you for informing me I'm a "dirty hoor", thank goodness for that, I thought I was a traffic warden. Further, if I'm going to hell then I'm sure I'll be in good company, after all, that's where all the interesting people go and finally, I know prostitutes who wouldn't use that type of language. Wash your mouth out.

Last Saturday we had a social evening and it was fantastic, we raised a toast to our departed friend and had a ball. ( I'm still at a loss to understand how a member of the male contingency managed to pick me up, I'm no Kate Moss. ) I drove home afterwards with a huge grin on my face, not least because when I left her, Amanda was wearing one of the gent's ties and suffocating another with her boobage in a bear hug. The originator of the tie was bellowing "FOGHORN - LEGHORN" at varying intervals, ( as you do ). Since I no longer drink, the latter parts of any evening are all but lost on me now, so when it gets to the part where a glassy and teary eyed volunteer launches into "Danny Boy" or starts mourning the green, green grass of home ( in spite of the fact they've only ever been to Wigan as a boy ), it's probably time to go.

( As a complete aside, it is a little known fact that Irish people only know the first two lines of "Danny Boy", after that they mumble. FACT. )

Speaking of faux-tragedies, Susan and I arrived in Carlisle the other day to begin our tour and as I pulled into the carpark I noticed a pigeon in the middle of the road. Most pigeons would fly away but he wasn't budging so I got out of the car. He was clearly very badly injured, operating on one leg and unable to fly. I tried to scoop him up but he wasn't having that, so in the end with some gentle "hooshing", I got him to the side of the road. We checked in and went for coffee but my conscience was getting the better of me. I asked the waitress ..

"This might sound strange, but could I have some bread ? It's for an injured pigeon 'round the back."

So I tipped her and thanked her and waited. Eventually she appeared back ...

"I've searched high and low and can't find him."

I wandered off to see if I could locate pigeon ICU. Oh I found him alright, except he was about an inch from the ground, a car had got him and he had gone to the great Pigeon Fancier's Club in the sky.

Amanda did her "Mother comforting voice" thing at the social, you know, the one you use when you have to explain to your four year old why you had to flush the goldfish down the toilet.

"Sometimes, animals just know when it's their time, and they just erm ..... decide to end it all."

Comforted by the notion that it was in fact a suicidal pigeon, tomorrow I am off with Mr. F to Spain for a week.

Before I go to the delayed departures nirvana, I thought I would let you know that my friend Claire has finally gotten off her backside and started blogging, there's a link to her blog here ;

Enjoy. Never again will I bring her to my local Tesco's, where they have now negated the need for an announcement system.

I'll catch up with you when I get back from Catalonia, where they have just outlawed bull fighting. What am I supposed to do for a week then ? ;)