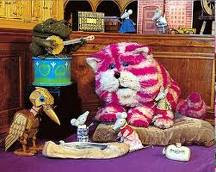 Good evening all and greetings from Belfast where I arrived today having survived the onslaught of fresh snow. The timing was impeccable, I just arrived in the city as the snow started so managed to evade any dangerous driving. I got the boat from Stranraer and I'm very glad I did for two reasons -

1. Flights were cancelled between Glasgow and Belfast and ;

2. I can't be bothered with flight baggage weight.

Jeez, by the time I've packed all of my toys and laptop I'm already over the limit, never mind including clothes and personal stuff. I sprinted on to the boat having been stopped by Dumfries and Galloway's finest "Polis" for speeding. ( I really didn't mean to, I was singing along to The Pogues and Kirsty McColl ). Had it just been the male cop who stopped me I would have been fine, because he conducted an entire conversation with my breasts. His female partner on the other hand spotted the leather trousers and mop of hair getting out of the car and decided she was going to throw the proverbial book at me. Wonderful.

Never mind, I got the boat eventually and settled back in a recliner seat with a hot coffee to relax, intending to let someone else worry about navigation for a while, when I was startled out of my comfort zone of contentment with a shriek -

On a boat where there were literally scores of people for her to choose from, the one and only resident person of dubious intellect had chosen me, to wow with her various conspiracy theories. Brilliant.

"Did you know that they will let the boat sail if they find fewer than 20 faults ?"

"Oh yes, I mean we could be sitting on a time bomb here."

I could feel all levels of polite tolerance beginning to ebb away at an increasing speed so I excused myself and hid in the toilets for a while. No joy, when I came back she was still there.

In the end I told her I needed to drive to Co. Cork when we got to Belfast so really needed to sleep. Through the divine intervention of someone, that worked and when I woke up from my snooze she had cornered a terrified construction worker on the deck of the boat and was busy lecturing him on the dangers of tar to the lining of the lung. Result.

Never was I so glad to see my sparsely furnished and under heated hotel room, I could have bounced on the bed for joy. I had an afternoon appointment and then headed off to meet a guy I have met a number of times now. He picked me up and we went back to his apartment to play for a bit. In preparation he had some non-alcoholic mulled wine from M & S and some salmon on granary bread too, it was delish. Then the highlight of the evening - he introduced me to his custom made cross in the bedroom.

It was big, it was black and it had restraints at every juncture.

Without going into detail much fun was had by both parties ( cough ).

So tomorrow is another day, with appointments to fulfill and madness to evade, although the latter never seems to go according to plan.

I forgot to say, one of my Inverness chaps did a field report for me -

I'm off to jump into my Winnie the Pooh pyjamas and curl into my Bagpuss hot water bottle.

A girl's gotta have her comforts. ;)