A letter to the MSP's of The Scottish Parliament 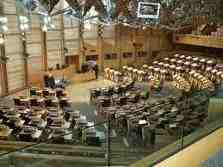 I write to voice my objection to the proposed changes to the law in relation to the purchase of sex in Scotland, ie : the private member's bill being proposed by Trish Godman. My name is Laura and I am an independent escort. I am not pimped, coerced or working under duress in any way. I am not labouring under any addiction, nor am I the product of an abusive background. I have been a sex worker for some 16 years and it's fair to say I love my job.

"People who buy sex do so of their own free will, whereas the majority of prostitutes are unwilling participants in this exchange of cash for sex."

Of what "majority" does she speak, exactly ? Over the years I have met women working at every level of the sex industry and in fact, it has been my experience that the vast majority of those women are happy in their work. Sure, there are days we dislike, the same as every other job, but the only women I have ever encountered who are truly unhappy are those who are drug addicted, or trapped through fear. This proposed legislative change does not take the above into account in any way, it seeks to prohibit the purchase of sex regardless of any circumstances.

Ms. Godman goes on to say ;

"Until the purchasers of sex are criminalised, individuals, families and communities will still suffer and organised crime profit."

How does my job supply "organised crime" ? I work perfectly legally, I pay my taxes and my national insurance and in fact the only people to benefit from the proceeds of my work ( aside from myself ) are the government, in collecting revenue.

Turning to Ms. Godman's next point -

"Some women have paid traffickers to bring them to a new country with the promise of a new life, while others are taken, for example, from poor families. Once trafficked, some women are forced into prostitution and denied contact with their families becoming “invisible” in the new country and denied access to services such as health care they may need. Most are tightly controlled with no freedom. Increasing isolation, fear and language difficulties make it hard to ask for help and escape their situation."

At last, a point on which Ms. Godman and I agree.

No right thinking person in this country would support the trafficking of women as little more than cattle, the practice is abhorrent and the full force of the law should be brought down on those found guilty. For me though, the crux of the matter is this - clandestine activity can only thrive in clandestine conditions. If the sex industry were to be fully decriminalised then it would be increasingly difficult for those who seek to abuse women to operate their despicable operations.

Amongst all of the horror stories of trafficking ( and let's make no mistake about it, it does exist ) there is also a community of sex workers like myself who truly enjoy our jobs and bring happiness into the lives of many men ( and women ) who may be widowed, disabled or in simple terms, lonely.

I say that the solution to the current issue of trafficked women ( and men ) is not to persecute those who choose to enter into consensual sex for payment but rather, to concentrate on those who are working against their will.

Ms. Godman seems to draw a lot of her information from Ann Hamilton and Glasgow City Council. To my mind it is simply not possible to "reduce demand" for sexual services. Ms. Hamilton would have us believe that reducing demand for such services is the way forward in reducing harm to sex workers. I submit that the correct approach is to look at reducing harm to sex workers by taking the stigma and the social exclusion away from the sex industry, so that both sex workers and clients can feel able to come forward and voice any concerns that they may have to the authorities. If the true aim of the proposed legislative changes is to protect the vulnerable within the sex industry then that is the only way forward.

In the meantime, I thank you for taking the time to read my submission and look forward to hearing from you.