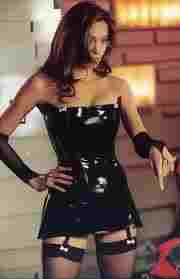 No matter how hard he tries, that slave of mine only manages to try my patience. Last weekend as part of our "weekend of hell" we hopped on the train and headed to a town where he wouldn't be known, so we could play. In his "real" life, my subordinate has a position where people brown-nose him all day. I relish the task of taking him down a couple of pegs or two to counteract his sense of inflated ego and I do it with style. First off, I frog marched him to a beauty salon where he had his chest waxed. We told the beautician that he had lost a bet, hence I had to sit in on the session and watch him squirm whilst it was done. It was tremendous fun and actually, I think he rather liked the end result.

From there we headed off for some enforced shopping, it's every woman's dream - to be able to browse the aisles and bark orders at a submissive male to produce a card to pay for the finds. Humiliation must be a part of the process, so whilst we were busy having a very pretty basque wrapped, I quizzed the assistant.

"You wouldn't have him down as a cross dresser, would you really ?"

"Come to think of it, I don't think you'd assume gay, either."

The look on her face was priceless as she tried to work out if I was serious or not and more to the point if my male companion was mortally offended. He was, and it was delicious.

On to Boots, where I was browsing the lubricants ( as you do ) and I asked him loudly; "Do you need any more lube for the gay gang bang ? Just asking like."

He hung his head and several sharp intakes of breath ensued. Wonderful stuff.

For his final humiliation, to my eternal delight I spied a children's fun fair and sent him down the helter skelter with an assortment of hyper active three year olds. If you knew the man and his demeanour, perhaps you'd understand why the mere memory of that and typing it out has my shoulders shaking with laughter and earl grey tea travelling in the general direction of my nose.

I love my job, and I love my guys, from the "vanilla" guys who bury their heads in my vales and hills to my subs who bury their heads in shame. That said, tonight I resemble Ian Paisley with a toothache. To describe me as "cross" would be to describe Hitler as "having some issues". I am tired, it has been a very busy day in Inverness. I am also wholly fed up, because I fail to understand why we live in a country that can send entire military forces into other countries to flush out extremists from the hills of Afghanistan, but we can't clear some fecking rail tracks. Unbelievable. All trains from Inverness are cancelled tomorrow until further notice.

So if you'll excuse me, I'm just off to the bar of the hotel to find some man in a suit to bitch at.