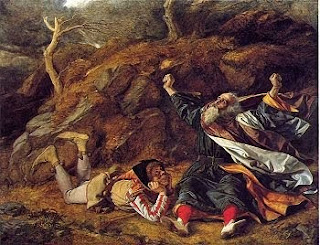 In the grand scheme of things, I'd rather not have been around when Shakespeare was writing one of his masterpieces. With all that backstabbing ( metaphorically and physically speaking ) that was going on, by the end of one of his productions, almost the entire cast has been murdered or they've gone stark raving mad. I remember with a tremendous fondness being brought to see Zepherelli's production of Romeo and Juliet and being absolutely gutted at the end. "Nooooo, don't do that, she's not really dead, she's .... Oh." ( As I recall, the whole excursion was almost ruined by a couple of eegits who bellowed during the love scene "Good man yerself" but a steely glare from Sr. Bernadette soon sorted that. )

After that we went on to do The Scottish Play, and Lady M remains one of my favourite characters to this day. ( I don't suppose it occurred to anyone to tell her that all the sweet perfumes of Arabia would do nothing to help a psychotic episode but then it was centuries ago. )

The reason I'm having fond Shakespearian thoughts is because on Saturday, J took me to the Theatre Royal in Glasgow to see King Lear and it was wonderful. When the lead character carried Cordelia onto the stage for the final scene, I must admit my waterproof mascara was tested to the max. ( In fact I made my excuses and made for the ladies after curtain fall, only to run into a regular client and his wife, but she was too busy exchanging air-kisses with the creme de la creme of Glasgow society to notice the animated wink he sent my way - cheeky sod. )

A few things have had me deep in thought lately, not in a maudlin way though.

About a month ago I had a serious falling out with a lady who means a lot to me, I lost my temper ( as did she ) and since we are both of a similar Celtic disposition ( for which read - feisty, hot headed and stubborn as mules ), a silence ensued that I know affected me deeply, perhaps her too, although it would kill her to admit it.

Then I went on tour to Newcastle and Susan and I watched the news coverage of the events in Japan unfolding with slack-jawed horror. These people were having their entire lives taken from them, their homes, their families, their everything. It really put my own gripes into perspective and so I did the unthinkable, I wrote a very long and very open email which in all honesty could have been summed up in one word - "Sorry".

Within 18 hours, came the reply, equally as laborious but which could be summarised as "It takes two people to have a row, so I guess I'm partially to blame too". ( If you knew the lady concerned, that really is an incredibly generous concession to blame, more than I expected actually. ;) )

Sometimes, to apologise and offer the hand of friendship is to be the bigger woman and I'm very glad I did.