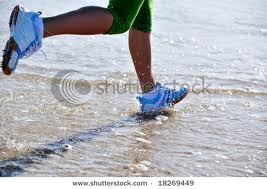 Evening all, greetings from Inverness where it is pouring down instead of the promised 16 degrees. ( I suppose it's better that way than doing my best impression of "boil in the bag" in PVC. )

The Race for Life was last Sunday and one of the most enjoyable days I've ever had. 60,000 women gathered in Glasgow and between us we raised £1m for cancer research, a truly awesome achievement. What I loved about it most was the sense of camaraderie amongst the women, just for once it didn't matter what colour of skin you had, where you came from, what you did for a living or even your chosen creed - everyone was there for one reason and one reason only, to remember those who had lost their brave battle with cancer and to celebrate the survivors. There were women running in full Muslim dress and even one lady in a Sari and shorts, quite a bizarre sight to be honest.

At the end of the day, we are nothing but sophisticated monkeys, and every so often we have a reminder of that. London must surely be one of the most multi-cultural cities around and what I find difficult ( as someone who insists on chatting to the bloke next to me in the queue in Asda ) is the way no-one will look anyone else in the eye. If you go on The Underground, everyone picks a spot to stare at or they become engrossed in a book and don't acknowledge anyone else in case they are a loose cannon. Look what happened when the July bombs went off though - everyone pulled together to deal with a common threat.

( Sorry for veering off course, but psychology fascinates me. )

This coming September, having been well and truly bitten by the bug, I have decided to do a 13k overnight walk, also for cancer research. Don't worry, I won't have my hand out again, I will hit neighbours and family this time.

I want to thank each and every single one of the people who sponsored me, in particular Ms D. Mopp of London who contributed £100, I am so grateful it's difficult to put it into words. I made my target of £500 and I know that money will be so much appreciated.

Before I sign off, I'll leave you with this little belter -

"A female political activist and former parliamentary candidate has recommended the introduction of legislation to legalize the provision of enslaved female concubines for Muslim men in Kuwait in a bid, she says, to protect those men from committing adultery or corruption.

She suggested that special offices could be set up to provide concubines in the same way as domestic staff recruitment agencies currently provide housemaids.

“We want our youth to be protected from adultery,” said Al-Mutairi, suggesting that these maids could be bought as prisoners of war in war-stricken nations like Chechnya to be sold on later to devout merchants."

You couldn't make it up, could you ? And they say that we sex workers set the women's movement back. Hmmmmm.