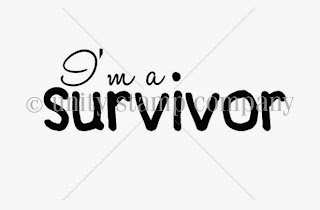 As we sex workers struggle to get the media to address us as just that, as opposed to "prostitutes", there is one title which has been viciously claimed by the anti sex work brigade, and it is that of "survivor". If you think about it, the term "survivor" invokes a lot of immediate emotions. Anger, disgust, empathy, pity and admiration. So all in all, a pretty valuable tool. The emotions of the reader come full circle and it's taken as a given that whatever went before can be forgiven, once you declare yourself a "survivor".

Let me set this straight from the outset, I have no end of admiration for women who got into the sex industry through coercion, desperate circumstances or fear, and who got out again and made a new life. However, some women get into the sex industry and simply flourish in it. I know, because I'm one of them, and one of many I have met. So for me, hijacking the term "survivor" just seems wrong.

Why is it that we cannot forgive "sex workers" as we can "survivors" ? Maybe it's because as sex workers we don't seek your forgiveness, just acceptance. And that takes a lot longer to chew. But think about this, we don't rely on an emotive title. We are who we are, sex workers, nothing in that title envokes your sympathy and neither should it.