When 'Justice' is anything but. 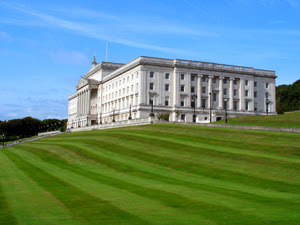 On Thursday 9th January, I was invited to give evidence to the Justice Committee in Stormont, Belfast. Having never done so before and as the newly appointed spokesperson for Scotland and Ireland for the IUSW, I was understandably nervous. I wasn't aware that a presentation of sorts was required until I got there, I had assumed it would be more of a questions and answers session based on the written evidence I had already submitted.

Before my evidence was heard, Ruhama and Turn off the Red Light gave theirs and the Committee welcomed them with open arms. They asked them to clarify a few points and that was the extent of their interaction, they were treated with the utmost dignity and respect. Then came my turn. I spoke slowly and clearly although I was immediately put off by the fact that one MLA had walked out as soon as I started to speak and several others has switched off completely and were on their laptops, ignoring what I was saying in favour of more pressing matters. I decided that of foremost importance was to keep my cool, because I truly believe that if you go into any debate and start shouting, you've lost.

After I'd finished, what followed was the single most horrid attack I have ever had from anti's, at least face to face. The chairman of the committee Paul Givan, began by undermining my credibility as a representative, saying that because I am from the IUSW I am effectively the face of pimps. Very calmly I explained that the person they were repeatedly referring to may have had links with an escort agency but that I was there in my personal capacity as an Irish sex worker with twenty years experience. That was completely ignored and Jim Wells MLA went on to allege that I receive funding from pimps and that's why I speak out.

Let's clear this up for once and all, shall we ? I am not a pimp, I have never been a pimp and am an independent escort. I have never received funding from a pimp of any description. I have however, set up a Gofundme page for donations from fellow sex workers and allies and I have done that for a very good reason. In 2008 I was sacked by a major UK bank because I was working part time as an escort, the ins and the outs of that I will go into at a later date but for now, what you need to know is that I fought them through the courts for four years and in the end I lost on a technicality, leaving me liable for costs for the other side and over 30,000 in debt. It broke my heart, but the whole dark period is what gave me the anger and strength I have today as an activist for sex workers' rights. When the time is right, I will expose exactly what went on behind closed doors, the cover ups and the lies. In the meantime, I find myself spending hour after hour working for the safety and legal protection of sex workers and since the IUSW doesn't have any money, (relying solely on donations) then I am alone in financing travel, childcare and hours of sex work lost to campaigning. So, there's my 'funding' in black and white. There is none, bar what I make myself and what is donated.

Moving on, Jim Wells asked if Laura Lee is my real name. Of course it's not, it's a working name I employ, mainly to protect my family. I couldn't be taken seriously he said, unless the Committee were made aware of who I really am. So I was compelled to give my real name to what was fast becoming the Spanish inquisition. Here I must take some blame, it was open to me to offer to pass my driving licence over to a member of the committee who could have noted my name, rather than place it in the hands of the abolitionists, who were furiously scribbling notes behind me. Hindsight is a great thing, and when you're under pressure it just doesn't occur to you to take an alternative route other than the quick. I have no doubt that the abolitionists present will now use that information against me, it just remains to be seen how low they will go.

Jim Wells went on to make a further claim - that whilst it's admirable that I abhor what happened to Petite Jasmine in Sweden, I am choosing to ignore the deaths of 127 sex workers in The Netherlands. What Mr. Wells possibly forgot to mention, is that all of those deaths happened BEFORE legislation, and that since legislation, the sex workers work with the police rather than against them, reporting all that they find untoward and being able to rely on real support. He escalated his questioning from there to - 'Would you suggest that a son or daughter should become involved in that career ?' Now, let's bear in mind that that is a Justice Committee, who's sole purpose is to collate evidence, is that really an appropriate question ?

It got worse. From there, the chairman Paul Givan began to ask personal questions as to the relationship I have with my father and my sex life. I'd like you to take a step back for a moment and imagine if they had asked those questions of Ruhama, there would be national outcry. I was a sex worker, a woman, alone, and they thought they could bully me.

For me, the crux of the problem with the entire exchange came with this statement from the head of the Justice Committee, Paul Givan - 'Yes, but some of us do not need any research or any evidence.' For someone purporting to be collating evidence for the Minister for Justice, that is truly frightening. I'd also like to ask the Committee, exactly what they have done about the very real problem of teenagers being sent into the care system in NI (B & B's)and subsequently disappearing, to the hands of abusers. Taken from a 2009 study done by the Equality Commission for Northern Ireland, p.47 -

Those presenting themselves as minors to the immigration authorities at the airport cannot be placed in police custody because of their age, neither can they be placed in immigration removal centres/immigration detention until they have been properly interviewed by the UKBA. The information gathered through interviews indicates that 16 cases of people claiming to be 17 years of age have been referred to Social Services by UKBA since April 2008. Fifteen of them disappeared from accommodation provided on an emergency basis by Social Services teams in Belfast within hours of their arrival. Another child went missing after a few days. As one representative of a support and advice organisation stated:
"They are not minded while they are there. There is a loophole in the system which is used for this, the traffickers must know that the kids are going to be placed in a B&B from which they will be easily picked up."

Bearing in mind that the above study was done in 2009, I shudder to think what the current figure is with regard to missing children. It seems to me, that while these arguments rage on about prostitution which largely involves consenting adults having sex, real victims are suffering, and I don't see an outcry or Committee hearing to address that.

It's funny, I knew in going in to address a committee which is largely DUP that they would hate me. They would hate my background, but more, they would hate the minority group I speak for. I know that they think themselves morally superior to the rest of us because they worship The Bible as they see it. But I see it the way it was intended -

'You will be judged with the judgement you make of others' - Matthew 7:2