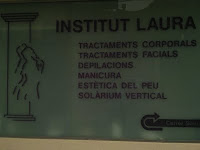 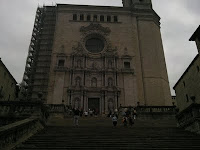 So I've arrived back from Spain and I had a wonderful time. We were based in Catalonia in a beautiful villa by the shore and the weather was absolutely idyllic, but for one day. Having psychologically steeled myself for the "Gecko" experience, I am bitterly disappointed to report that I saw ONE of them whilst I was there and he was tiny and just scuttled off into the under growth. On the other hand I did get to see some local ladies of a very friendly nature ply their trade by the side of the road. They occupy a stretch of road that runs from Figueres to Gerona and they sit in white plastic deck chairs waiting for business. Passing motorists can tell if they are temporarily engaged because their chairs will be tipped upside down to indicate that they will be back shortly. One of the ladies in particular was an olive skinned stunner with long jet black hair to her waist and I couldn't help but think that she would do very well as an Independent Escort if she cleaned her act up. Some of her fellow professionals, on the other hand looked in dire need of a long shower and a hot meal. It was a real eye opener.

Aside from lazing around in the sun and digesting books and bottles of chilled wine by the truckload, Mr F and I wanted to see the local sights so we went to Gerona for the day. Our first port of call was the Cathedral, which is quite simply very beautiful. It was wonderful to stroll around the cloisters nattering away and out doing each other with random facts of Catechism. It's built on the grounds of a Roman Temple and is steeped in history. I've attached a picture for you, it is very high up and I think by the time we had seen all of it I was just grateful to have made it up all those steps, and no doubt my Mother will be thrilled I evaded being struck by lightning on entering too.

I've also included a sign for a beauty parlour we came across called "Laura's Institute". It gave us a giggle because apparently at Laura's, facials are a speciality. No chance, hehe.

Following a discussion it was decided I would drive and Mr F would navigate. That system worked well until Mr F decided we were completely lost. Luckily we came across a rather excitable man and his even more excitable poodle by the side of the road and stopped to ask for directions. Rather helpfully, Mr F bellowed in his Yorkshire accent " Pardon Monsieur " and it was only when I stopped giggling I had the heart to remind him that we were in Spain, not France. Never mind, I caught the gist of what the guy was saying and we eventually arrived back at the villa.

The hot weather and cool wine began to take their toll and I decided some alfreso fun might be the order of the day, as the back garden was a secluded affair, lined with mini fir trees. I gave Mr F my most seductive look and bent over the picnic bench in the garden before asking him to "take me from behind". Strangely enough he didn't find the idea overly repugnant and all was going swimmingly until the next door neighbour came out to water his lawn and peek through the hedges simultaneously. If I didn't know better I'd swear he did it on purpose. Meh.

Not to be deterred, we later decided to stroll out for an evening meal and as our path took us down a track with trees on either side I propped my delighted friend up against a large rock in a standing position and took him in my mouth. His face was a picture and the grin he was wearing afterwards was a reminder of why I love what I do.

Sorry to say, but our smiles and laughter were relatively short lived when we boarded the flight home, not least because it was the end of a wonderful week. We had chosen to sit in the tail of the plane because I have a belief although it may be completely wrong that if the plane crashes we would be more likely to survive. (Although, knowing my luck we would have come down on The Pyrnees and had to survive by eating our fellow passengers.) Aside from that, the Glasgow equivalent of "The Munsters" had seated themselves en masse behind us and began bawling at each other across the plane. As you do, they had based their entire evening meal plans on a Ryanair menu. For the love of God.

"ONE OF THAY ROLLS. ANY TATTIE SCUNS ?"

I wanted to bang my head repeatedly on the seat in front of me, gnash my teeth and issue a wail that would rival a banshee. Mr F was very adept at keeping me calm, in fact in the end we both ended up crying with laughter. The service trolley had started in the middle of the aisle and by the time it reached Chelsea, Chardonnay and Destiny at the back there was very little left by way of reheated Aldi's specials to quell their appetites. The matriarch of the clan was the spokesperson and it was easy to see why. Michael O'Leary should look at hiring her to do the announcements at the airport thus saving himself the expense of a PA system.

Funnily enough by the time she had finished her one woman call to arms I had conjured up an image involving her good self and salami, perhaps not quite in the way she imagined. I suppose it's to her credit that she didn't notice the other passengers around her in stitches because she was so busy coughing and hacking into the back of my seat, without covering her mouth, naturally. To be fair I don't think the concept of closing her mouth has ever occurred to her for any reason.

Getting off the plane I noticed Mr O'Leary has gone to the trouble and expense of painting " Bye bye latehansa" on the side of his craft. I'm not sure why that surprised me, but for a "businessman" I thought it was bitchy, childish and at variance with basic expected standards of professionalism.

I think his work ethos sucks, and not in a pleasurable way. ;)