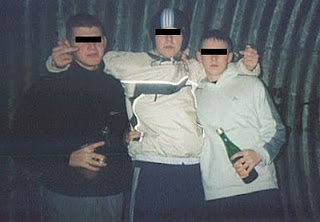 I have what I proudly refer to as a "ned filter". ( For my Southern readers, it means 'chavs'. ) I've always been able to tell a lot from the way a guy speaks to me on the phone. Recently I was chortling out loud when I was reading Darla's blog about her initiation into Glasgae speak. Like Darla, I didn't hatch in Glasgow and so had to learn the "Weegie" lingo pretty quickly.

To be fair, I've come along way from a desire to thump a woman who called me "hen" in a night club. I thought she was calling me an ugly bird. Dear me.

"I'm pure hoachin', so I am, no ?" - " I have a strong desire to get my hands on some more of *insert class A substance here* that has made me feel this crap, do you know what I mean ?"

"Pure hunners o' thay wans" - "There were lots of those afore mentioned items".

"Get that roonaboot ye"- "Comprehend that if you will."

"Scunnered the day" - "I'm feeling a bit under the weather this morning, probably due to an ingestion of copious amounts of Buckfast".

If you are intending to visit Glasgow, thanks to Darla I found this neat little site :

Here you can find pictures of neds and common factors to assist you with identification too. Hooped earrings are essential for the girls and baseball caps are the attire of choice for the boys. The way in which said caps are worn is essential, they must be tipped back to expose as much of the shaven head as possible, it would seem that this is an international symbol of recognition. This allows neds from other nations to safely approach and try and source some "eccies".

Actually, until today, I hadn't realised that there are categories of neds. This is from the survival guide ;

The Family Man Ned: "This ned is predominantly found outside of the city centre. This ned will usually be seen making his way down the road pushing a pram, with at least two other small children trailing behind, on his way to the DSS. These children will almost certainly be fighting with each other or throwing stones at buses and so the family man ned will usually be shouting at them. "Michela, stoap flingin stanes at Charlene". This ned is slightly older than the other neds as he will have at least three children and can be considered as a good example of what happens to a young common ned who does not grow out of neddism. A ned can become trapped inside ned circles if he gets lumbered with a "wean", turning into a family man ned, usually at the ages of 13 to 15."

Be still my beating heart.

Right, I'm off to frog march my little darling to a museum and instill some culture and education whether she likes it or not. She will join the ned fraternity over my dead body.