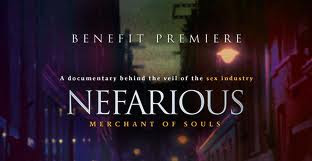 Sub titled the "Merchant of Souls", Nefarious is a documentary currently being screened by Abolition Scotland. I went to a viewing in a church in Johnstone. My companion and I immediately aroused suspicion and the lovely lady who was hosting the evening asked who we were and where we were from. Whilst my friend answered her questions, I fumbled around in my bag and finally fished out my glasses and notebook, perhaps they thought I was a reporter. I've become quite accustomed to sitting in a room full of abolitionists and holding my own but there was no necessity for that here, because this was a very different environment. This was a group of truly lovely people, devoutly spiritual and all ready to be exposed to the 'truths' of trafficking.

The film opened with a look at Moldova, which is reportedly at the heart of trafficking. Here, we were told, 10% of the country have been trafficked. There was no mention of an overall population figure or the industries attached to that percentage, be they domestic servitude, factory work or the sex industry. The figure of 10% was offered as a bald fact.

The next segment was entitled - 'The Breaking Rooms'. Having answered advertisements for offers of jobs abroad or having been simply snatched from the streets, it is here that the young girls are repeatedly raped and beaten until they comply with their handler's orders. Their treatment was horrific and the psychological torture that they endured was heart breaking. One statement stuck with me from that segment, that once some of these girls are sourced from an orphanage, they fall into 'a vortex' and are not missed. Why not ? Can you imagine if a child was snatched from an orphanage in the UK ? There would be a nationwide search and no stone left unturned until she was found.

The film moved on to Cambodia to look at the child sex trade and there is no other description for it, it was stomach turning. Here, we were told, there is a flourishing industry in the sale of a daughter to the sex trade. There was a horrific image of a seven year old girl's pyjamas, badly blood stained around the groin where she had been raped by a 'punter'. As a mother, that made me cry. I couldn't help but think of my own daughter when we saw images of very young girls wearing next to nothing and reluctantly flirting with punters. I wanted to scoop every one of those little girls up and just get them the hell out of there, to where they could be children again. And safe.

Then came the statistics. 80 to 90% of parents in Cambodia sell their daughters to the sex trade. Often,(we were told) it's not to provide for food or other such necessities but luxuries, such as mobile phones and televisions. Indeed, in some cases, the women celebrate when they give birth to a girl because they know that as soon as she becomes in any way exploitable she will be their ticket to a new life of prosperity. What a disgusting conjecture to make.

As a mother myself, I object to the unfounded hypothesis that the majority of an entire race will see a baby girl as a meal ticket. Mothers will fight to the death for their children and would offer themselves in a heartbeat to save them, that's reality. Of course there are exceptions to that rule but to broadly proclaim a figure of 80 - 90% where there is no real basis or evidence to substantiate that is misleading and counter factual.

Throughout the screening Melissa Farley was interviewed. Since Farley's evidence has been treated as biased and questionable by a court of law, and not forgetting the complaint to the APA, then I disregard any of her assertions.

At the end of the screening, a member of Abolition Scotland stood on the altar of the church to address our group. This was the moment I had been waiting for. They thanked us for coming, asked for donations and sold some DVD's and then began to speak in favour of Rhoda Grant's proposal to criminalise the purchase of sex. The film we had just been shown, (they said) is just the tip of the iceberg. Trafficking is RIFE in Scotland too. Why only in 2006 did a police report make mention of 6,000 people trafficked into Scotland, with approximately 90% of those destined for the sex industry.

Mathematics was never my strong point but I'm pretty sure Abolition Scotland just claimed that in 2006, there were 5,400 prostitutes trafficked into Scotland. Isn't it simply amazing then that last year we had one conviction ? ONE.

Needless to say I'm going to request a copy of that 'police report' and debunk the statistics they are using for myself, because that's a MUST do.

Of all the memories which will stay with me from that evening, one of the most potent was the woman behind me who was visibly moved. She was going to write to Rhoda Grant, she said, because THAT level of trafficking in Scotland is simply not acceptable. It took all of my self control to resist initiating a friendly debate based on fact, but I believe that it is far better to write about the truth and inform many than to channel my energy into challenging one.