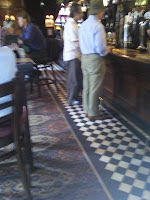 I am writing this blog absolutely incandescent with rage. Why ? Well, let me get my rant out of the way and then I can move onto the positive stuff, of which there's plenty. :)

I flew back into Glasgow last night from Heathrow after my London tour and I was feeling a little tense, to say the least as my flight was delayed and then there was a delay in baggage too. I was making my way to the baggage collection carousel when a woman who was very unsteady on her feet stopped me and asked where she could pick up her baggage. Erm, she was standing directly beneath a large illuminated sign that clearly said "Baggage reclaim". I decided not to jump to any conclusions, after all there are many reasons why a person could be in that state, MS, a stroke, etc. We got to the carousel and everyone was a little testy because we were waiting about 20 minutes for our bags. Cue unsteady lady, emerging from the bathroom and falling on her backside. A couple of other passengers got there before me and helped her to her feet. She wobbled over to the carousel and appeared to wait for her bag. In the meantime she took the same bag from the previous flight from the carousel three times to check if it was hers. ( By the way, who ARE these people that own the bags that just go around and around on a carousel ? )

There were four strapping lads standing by the carousel, creased up with laughter at her antics. They were annoying me to begin with, because they were so loud, but then came the clincher. The poor lady proceeded to wet herself. There was now no doubt in my mind that she was very drunk. This was all the lads could bear and they fell about laughing. I'm afraid it was all I could take and I lost my temper. I screeched at them - "How about you help her out instead of f*cking laughing at someone else's misfortune ?" There was a long and very silent pause, coupled with several young "gentlemen" looking at their feet. Honestly, one of these days I will get beaten to a pulp for that large cavity beneath my nose which just won't close.

In the end I went to baggage services and asked for their assistance, and two of their people came out to help her. It pushed my buttons because a woman who I'm very close to ( and fond of ) almost killed herself with booze but thankfully found AA and has now been sober for 7 years. She woke up many mornings with wet clothes in a police cell or a hospital cubicle, and I don't think it's for anyone to judge or mock anyone else.

London was absolutely fantastic, I had a ball on every level. Friends, work and relaxation, it was just brilliant. The hotel I was staying in was on Park Lane and very lovely. I went down there primarily for an industry social, to meet other escorts and friends from within the industry but decided to do a tour alongside the social. I was very glad I did so as it was hugely enjoyable. Come the night of the social I really enjoyed catching up with everyone, not least the very lovely Dollymopp, who is based not far from London Bridge and Celine, who's Oxford based and quite mad, but in a positive way, we had such a laugh and she went to the trouble of baking chocolate treats for everyone which were duly devoured.

The next day started a little hazy, actually not so much for me but Amanda was ill, LOL. We went for a stroll around Soho and I got some new toys to play with. ;) We decided to adjourn for an afternoon refreshment as some members of our party were meekly suggesting a "hair of the dog". We found a lovely pub and settled in the beer garden outside for a cool beer, heaven. As blase as you like, who should stroll by but Woody Allen and his wife !! Amanda was duly booted into the pub to get a picture which she did following "Why do I have to do everything ?" I've included the pic above, although it's not very clear, but suffice to say we were all gobsmacked lol.

Eventually we all tumbled back into the hotel feeling decidedly squiffy, which was just as well in my case because Mr F and I decided to play with some of my new toys ( and some which he had bought too ) and let's just say I found the lowering of my pain threshold quite useful. *cough* The next morning it was my turn to suffer and Oh suffer I did, but a huge bowl of porridge and some ibuprofen soon had me feeling better. Mr F and I decided to do the whole tourist thing and hopped into a taxi to visit the London Dungeons. When we got there the queue was absolutely horrendous and we discovered we should have booked and pre-paid online. *sigh* All was not lost though as there was a brand new attraction just across the street called "The Tombs", which has apparently recently been voted the scariest attraction in the UK, and there was no queue !! Hurrah !! On the way down there we got talking to one of the organisers and I asked him -

"Well, we've had pukers, fainters and the odd person wee themselves so I'd have to say yes."

I'm so ashamed, I have no problem facing real spectres or poltergeists ( more about that later ) but I turned back and said "I can't do it". I then had "the walk of shame" past five year olds who were holding their Mum's hands and bouncing up and down excitedly at the prospect of going in. So there you have it, I am an absolute disgrace, LOL.

To make up for it ( sort of ) we visited the British War Museum which was really rather good, especially when we came across some items of memorabilia kindly donated to the museum by "Ms. L. Lee".

So that was London. I am going to tour there at least twice a year I think because I enjoyed it so much. On a very positive note, Mr F is taking me to Spain for a week in September so it's back to starvation and sunbeds lol. I'm off to Dundee for two days on Thursday and am looking forward to it very much.

Speak to you from Dundee,